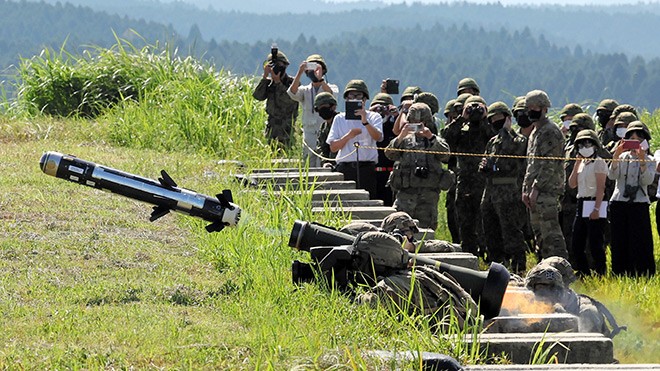 An anti-tank Javelin missile used by the U.S. Army is fired during the joint exercise with the Ground Self-Defense Force at a training range in Yamato, Kumamoto Prefecture, on Aug. 28. (Jun Kaneko)

YAMATO, Kumamoto Prefecture--Members of the Ground Self-Defense Force and the U.S. Army demonstrated on Aug. 28 here the deadly accuracy of the Javelin anti-tank missile system, which Ukraine has employed in its war against Russia.

During the joint exercise, a U.S. soldier carrying the portable Javelin launched two missiles and successfully struck targets 2 kilometers away.

Javelin missiles have drawn attention as the United States has supplied large numbers of them to Ukraine since Russia invaded the country in February.

Being high mobile and carrying a high hit probability, the shoulder-fired weapons reportedly played a large role in the defense of Kyiv, Ukraine’s capital.

The exercise at the GSDF’s Oyanohara training range, opened to the media on Aug. 28, is part of the annual joint drills taking place across many training sites known as Orient Shield.

Orient Shield is designed to improve the interoperability of the troops of the two allied countries to be deployed at the Nansei Islands, a chain of islands stretching southwest from Kyushu toward Taiwan, in response to a possible contingency involving China.

Previously, the U.S. Marines test-fired Javelin missiles during its drills in Japan. But this year's Orient Shield marked the first time for the U.S. Army to do so.

On the Japanese side, the GSDF fired four of its Type 01 LMAT missiles, its equivalent of the Javelin, all hitting their targets about 400 meters away.

The joint exercises are scheduled to last until Sept. 2 in Kyushu, with a total of 2,100 troops from both sides.