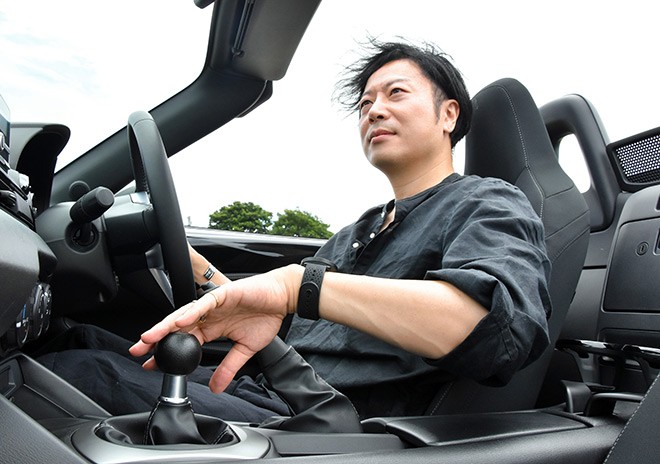 Running for several dozen kilometers, the winding pass with many uphill and downhill stretches is part of National Route No. 413 connecting Sagamihara, Kanagawa Prefecture, and Lake Yamanakako in Yamanashi Prefecture.

As Shibuya, 41, a self-employed worker living in Ebina, Kanagawa Prefecture, stepped on the accelerator with his right foot, the engine revved with a roar.

As soon as the needle of the tachometer on the dashboard indicated over 2,000 rpm, he stepped on the clutch with his left foot and shifted the gear stick from second to third with his left hand.

At the moment when the clutch was released to connect the gears, the roadster sports car continued accelerating with an increasing velocity.

"It's a pleasurable feeling that can only be felt with a manual transmission car," Shibuya said.

The expected shift to electric vehicles has triggered a last-minute surge in demand for manual transmission cars, such as the sports car that Shibuya drives.

While stick-shift fans think now is the last chance to buy manual cars that enhance the fun of driving, young drivers are being drawn to a more analog driving experience.

Major automakers are also adding manual transmission models to their lineups to cater to the demand.

HARDER TO DRIVE BUT BRINGS 'JOY'

Shibuya found his passion for driving after he lost his wife, with whom he spent a lot of time together, to cancer one year ago.

Driving was what filled the hole in his heart because he could take his mind off his grief only when he was behind the wheel.

Soon, he took a growing interest in driving a manual transmission vehicle that requires both hands and feet to operate.

With the government having set a goal of reducing greenhouse gas emissions to net zero by 2050, automakers are shifting gears to electric vehicles.

It could mean that manual transmission cars become a thing of the past before too long because stick shifts can only be installed on combustion engine vehicles, which emit carbon dioxide when they are driven.

Shibuya felt a growing sense that it might be the last chance to buy a car with a stick shift.

But the problem was that he only had a driver's license restricted to driving an automatic transmission.

In January this year, Shibuya applied for a class at a local driving school to be certified to drive a car with a manual transmission and passed the exam.

He took a test drive in a Miata equipped with a manual transmission and decided to buy the vehicle on the spot, making a lump-sum payment of about 2.9 million yen ($21,000).

After taking delivery in February, he drives the sports car almost daily.

It was harder than he initially thought to drive a stick shift.

But he has found joy in driving because the more he drives, the better his skills become.

"I came across a manual car at a turning point in my life and it has changed my daily life into something happy," Shibuya said.

But more than 1,100 units were sold each month from January to March this year.

Of these, the manual transmission edition accounted for 80 percent.

The current model was introduced seven years ago in 2015, so sales would be expected to dwindle under normal circumstances before a model changeover.

Although the increase in sales was partly spurred by the release of a special edition in December last year, a publicist at Mazda Motor Corp. said that the car is selling "beyond expectations."

According to the Sagamihara outlet of car dealer Shonan Mazda Co., it started receiving an increasing number of inquiries about the manual transmission Miata after fall 2020, when the government announced its goal of net zero CO2 emissions by 2050.

And when Mazda revealed in June 2021 its strategy to make all its cars electric by 2030, speculation was rife among users that the current model could be the last stick-shift Miata to roll off the assembly line.

"An increasing number of people visit our shop to buy, thinking that it could be the last chance to purchase a stick shift," said Kaito Kawasaki, a sales representative for new cars at the Sagamihara shop.

About half of the buyers of the manual transmission model are in their 50s or older.

They include those who want to buy manual transmission cars like the ones they used to drive when they were younger now that their children have grown up.

Some are determined to buy their last gasoline-fueled vehicles in their lifetime, Kawasaki said.

While several hundred units of Honda Motor Co.'s new Civic Hatchback are sold each month, the manual transmission model accounts for nearly 40 percent of the sales.

About half of the buyers are in their 20s and 30s, with most of them deciding to purchase the stick-shift option after gaining information about the car from social media comments and YouTube videos posted by members of the same generation.

"Manual transmission cars built with analog technology are, in fact, fresh to young people of the digital generation, and they enjoy the fun of tinkering with machines," said Daisuke Sato, chief of the product planning section at Honda.

Toyota Motor Corp. will add a manual transmission option to its automatic-only Supra sports car, set to start sales as early as fall.

Nissan Motor Co. has revealed its plan to include a stick-shift version for its new Fairlady Z sports car.

(This article was written by Takuro Chiba and Junichi Kamiyama.)