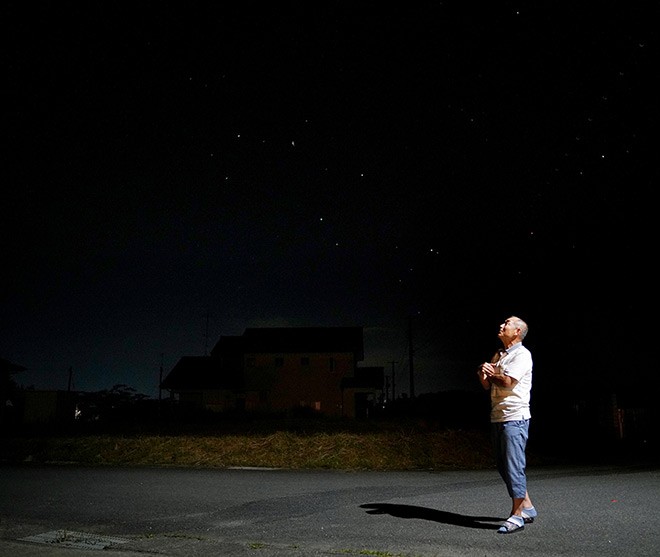 Yoichi Yatsuda peers up at the stars in the dark night sky in Futaba, Fukushima Prefecture, on Aug. 19. He and his wife are the only ones who returned to their community of about 60 households. (Shigetaka Kodama)

FUTABA, Fukushima Prefecture--Some residents were allowed on Aug. 30 to return to live here for the first time since the evacuation order following the 2011 nuclear disaster was partially lifted, but few are expected to take up the offer.

The town co-hosts the embattled Fukushima No. 1 nuclear power plant.

One former resident who lived in a community about 1 kilometer from JR Futaba Station said he was pessimistic about the town's future.

“I am afraid it will be impossible to see Futaba return to a normal town inhabited by various people--from babies to seniors--while I am alive,” said Yoichi Yatsuda, 71.

Following the triple meltdown, 96 percent of the town was designated as part of a “difficult-to-return zone,” with annual radiation levels estimated at 2.5 times those requiring an evacuation order.

With the lifting, 10 percent of Futaba’s land was cleared for people to live. It is the area the government designated as a special zone for reconstruction and revitalization, surrounding Futaba Station.

Prior to the triple meltdown, roughly 60 percent of Futaba residents resided in this area.

Recently, construction for public housing and roads had been feverishly under way around the train station as town officials scrambled to restore infrastructure to draw back returnees.

A large van parked in an empty lot near the station around noon on Aug. 19 to sell food, including bento lunch boxes and sandwiches, and other goods in Futaba.

Soon, crowds of construction workers lined up before the vehicle, which serves as a lifeline since the town now has no supermarket or convenience store. The new town hall stands nearby.

Beyond the town hall building, however, stretches vacated plots. Most of the shops and homes that used to line the town’s main street were dismantled after they were damaged by wild animals and exposure to the elements.

A 68-year-old man who bought rice balls and a soft drink at the van said it was his first visit to Futaba in 10 years since he fled to Kazo, Saitama Prefecture, where town officials evacuated to, along with more than 1,000 residents, immediately after the accident.

The remaining 6,000 fled to other parts in and out of Fukushima Prefecture.

The man said he was visiting Futaba to pay respects to his family’s grave and has no intention to return to the town to live.

Yatsuda, however, is one of a few evacuees who has come back to reside here.

There were about 60 households in the community before the nuclear accident, but Yatsuda and his wife were the only ones who returned under a special program that began in January allowing evacuees to live here to prepare for their permanent return ahead of the evacuation order being lifted.

Of the town’s currently registered population of 5,600, only 50 people from 29 households joined the program. The Yatsuda family was among them.

When the sun sets, construction workers go home outside Futaba. No lights were on in Yatsuda’s abandoned community--just complete darkness and bright stars in the summer night.

“Before the nuclear accident, I did not notice the stars were so close,” he said, looking up at the night sky.

He said his neighbors opposite his home are preparing to have their home demolished. He believes prospects for Futaba are bleak, at least for many years to come.

Futaba’s partial lifting of the evacuation order followed similar developments in June in Okuma, which co-hosts the nuclear plant, and Katsurao, a nearby village.

Evacuees returning were limited to their special zones for reconstruction and revitalization in Okuma and Katsurao.

So far, only one household returned in Katsurao, and seven households in Okuma. Most evacuees have already settled in places where they took shelter after the meltdown and have started new lives there and elsewhere.

Yusuke Yamashita, a professor of sociology at Tokyo Metropolitan University, called for a long-term program to assist evacuees.

“Though evacuees want to return to their hometown, they cannot, considering the reality facing them there,” he said. “The parties responsible for the accident should create a system to help evacuees keep their ties with their original communities.”

Sixty-six percent of households in Futaba said they hoped to maintain their ties with their hometown, according to a survey by the town.

“We cannot return soon, but we want to remain involved in town affairs,” said Toshihide Yoshida, 74, who heads the association of Futaba residents in Kazo.

(This article was compiled from reports by Noriyoshi Ohtsuki, Keitaro Fukuchi and Tetsuya Kasai.)