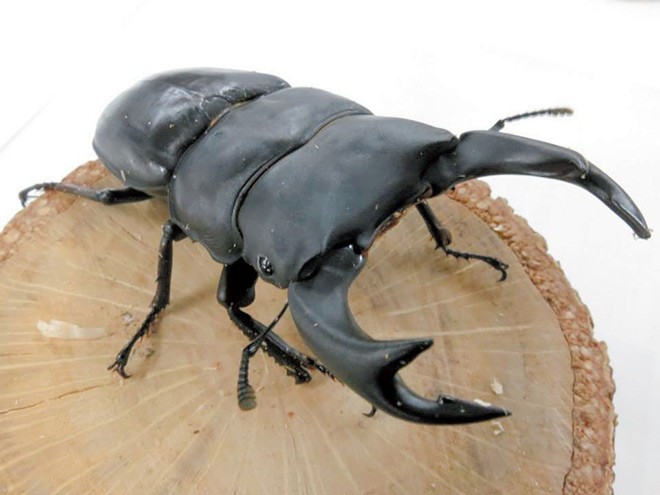 The "ookuwagata" (Japanese stag beetle) is listed as a vulnerable species on the Environment Ministry's Red List. (Yu Kotsubo)

Japan’s largest internet auction site will ban individuals from offering rare or endangered species, along with many other species that could potentially disrupt the ecosystem.

Yafuoku's (Yahoo Japan Corp.’s Yahoo Auctions) prohibition will begin from Sept. 29 and cover about 4,000 species, including the “ookuwagata” (Japanese stag beetle) and killifish, which are currently not banned by law for sale.

“I expect (the Yahoo move) will lead to discussions about whether the easy trade of wild animals should be allowed at all,” said Jun Nishihiro of the Center for Climate Change Adaption under the National Institute for Environmental Studies, who is knowledgeable about preserving biodiversity.

Other species classified as endangered, vulnerable or near threatened under the Environment Ministry’s Red List will also be banned.

Yahoo officials said decisions will also be made on individual species that are rare in certain areas, as well as species that are placed on the auction site after being found to have been inappropriately captured.

While similar restrictions will be placed on companies registered on the Yahoo! Auction store, those companies will be able to provide specimens they artificially bred, even if the species is endangered.

Company officials said the aim of the move was to preserve biodiversity while at the same time protecting companies capable of conducting responsible business transactions.

There are already laws prohibiting the sale of animals over the internet. For example, the Law on Welfare and Management of Animals states sales of mammals, birds and reptiles can only be done face-to-face so staff can explain how to care for the animals.

There are similar provisions in the law related to designated invasive alien species.

Not all endangered species are protected by the law, however.

Although there are 5,298 species in the latest Red Book classified as endangered, vulnerable or near threatened, less than 1,000 species are protected under the endangered species conservation law.

The Red List is not legally binding regarding trading the plants and animals it mentions, meaning species not protected by law can, in principle, be traded even if they are endangered.

There have been instances on Yahoo Auctions of individuals providing an abundance of one species, leading to suspicions of overhunting and creating a possible risk to the ecosystem.

One Yahoo official said the decision was made to go beyond current legal restrictions because transactions should not have an adverse effect on the ecosystem.

While experts welcomed Yahoo's move as being a much more expeditious way of stopping sales rather than through legal revisions, one said the discussion should expand to deal with the widespread use of the internet in society.

(This article was written by Fumi Yada and Yu Kotsubo.)