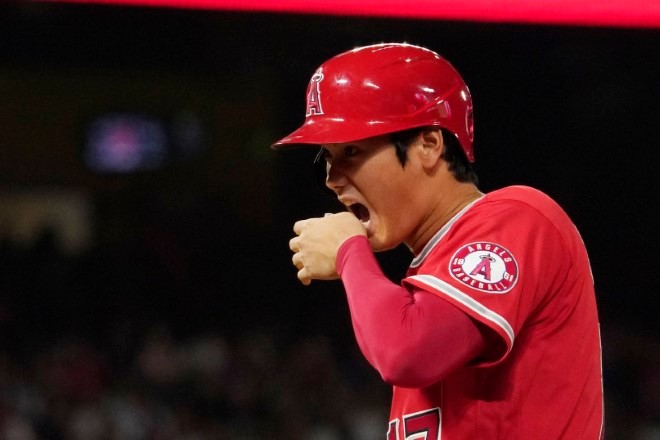 Los Angeles Angels’ Shohei Ohtani bites his hand after hitting a single during the sixth inning of a baseball game against the New York Yankees, Aug. 30, 2022, in Anaheim, Calif. (AP Photo)

ANAHEIM, Calif.--Aaron Judge is rolling toward September with Roger Maris firmly in sight.

Judge hit a three-run shot in the fourth inning for his 51st homer of the season, and New York snapped its three-game losing streak with a 7-4 victory over the Los Angeles Angels on Tuesday night.

Judge connected for the second straight night at the Big A, driving a high fastball from Mike Mayers (1-1) into the elevated right-field stands. Judge has five homers in his last eight games and leads the majors with 113 RBIs.

“I’ve never seen anything like it,” said Yankees starter Jameson Taillon, who left after two innings when he was hit in the forearm by a line drive. “Feels like any time he’s out there, he’s got a chance to do something special. Doesn’t matter what scouting report you have, or whether you execute your pitch or not. He’s just so good that you can make a good pitch, and he can still hit it out and all over the park.”

Judge had three hits and scored two runs in front of an Orange County crowd packed with Yankees fans who gave several ovations to the California-born slugger attempting to chase down Maris’ AL home run record of 61 set in 1961.

He’s right on pace: Judge and Maris both had 51 homers through the Yankees’ first 130 games.

“Got a pitch out over the plate, a couple of guys on, and drove it out of the park,” Angels interim manager Phil Nevin said. “That’s what he does. He’s in a groove right now. You just see, watching his swing from the side, how on time everything is.”

Andrew Benintendi and Anthony Rizzo hit early solo homers for New York, which lost Taillon to a bruised right forearm when he was hit by Magneuris Sierra’s liner to end the second.

“It’s not bad,” Taillon said. “It’s gotten a lot better. I was a little worried there at first. Had some pretty quick swelling in there. I was in some pain, and then got X-rays, found out it was negative, and I’m already seeing some improvement.”

“It feels great to put it behind me,” Weissert said while thinking of his rough major league debut, in which he gave up three runs while getting one out in Oakland last week. “It was definitely something to think about, but I knew I got called up for a reason.”

“He probably just left a few too many balls in the middle,” Nevin said. “He’s not afraid. He’s going right after hitters.”

Benintendi homered in the first inning and Rizzo followed with his 30th homer of the season in the second, both left-handed batters connecting to right field.

Stassi ended his 1-for-40 slump in the second with his eighth homer, his first since Aug. 5.

But the Yankees loaded the bases with two outs in the third and scored two runs when Ford couldn’t field a bouncing throw from Luis Rengifo at first.

Taillon yielded two hits and two runs in his abbreviated start, striking out two. He was hit in the head by a line drive in 2016 and again in 2019, but he feels optimistic after negative X-rays and decreased swelling. He’ll get treatment Wednesday and hopes to make his next start.

“We caught a nice break, it seems, for once in my career,” Taillon said.

Continuing his hot start with the Angels, Ford homered for the second straight night against the organization that employed him from 2012 until last season, when he was traded to Tampa Bay. Ford belonged to a whopping seven different teams in the ensuing 14 months, but he hadn’t hit any homers since the Yankees traded him until these two shots for the Halos.

Yankees: OF Harrison Bader is hitting off a tee and running. He could begin playing in games next week. The trade-deadline acquisition has yet to play for New York due to a foot injury that has sidelined him since June.

Angels: RHP Michael Lorenzen will make one last rehab start before he returns, Nevin said. Lorenzen has been out since early July with discomfort in his pitching shoulder.