Cause of death of detainee revealed for the first time, family says 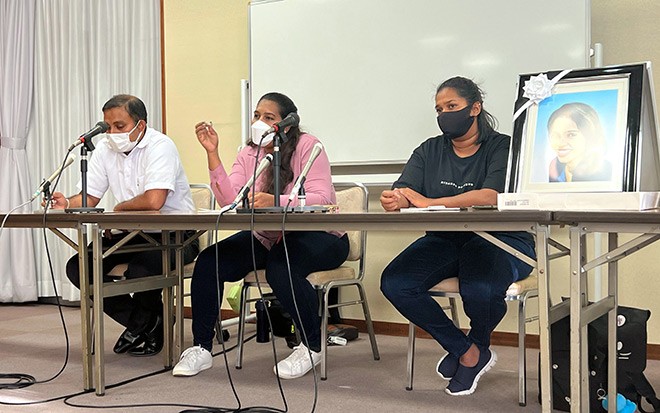 NAGOYA--The family of a Sri Lankan woman who died while in detention demands to know why prosecutors dropped their case against immigration officials when her cause of death was known at the time.

Wishma Sandamali’s family said on Aug. 31 they have reviewed the dossier of the incident compiled by the Nagoya District Public Prosecutors Office, marking the first time her cause of death was made available to them.

According to the family, an opinion written by a doctor in February this year stated that Wishma suffered multiple organ failure from dehydration and undernutrition caused by a loss of appetite.

The Immigration Services Agency of Japan made an investigation report in August 2021 about Wishma’s death.

She came from Sri Lanka to Japan as a student in June 2017, but was arrested for overstaying her visa in August 2020. She was detained at a facility run by the Nagoya Regional Immigration Services Bureau.

The Immigration Services Agency of Japan created an investigative report about the incident, in which officials said the cause of her death stemmed “from sickness, but it is difficult to identify the specific process that resulted in death.”

The family said it has seen an opinion letter written in April 2021 following a legal autopsy conducted on her, as well as a letter of opinion written by a different doctor in February this year.

But as of last year, the cause of her death had not been determined, the family said.

In June, the Nagoya District Public Prosecutors Office dropped the case against the senior bureau officials in charge at the time, who the bereaved family alleges committed murder or negligence as a guardian resulting in death.

The family has since filed a complaint with the Committee for the Inquest of Prosecution over the decision.

Now it is demanding to know why the case was dropped since what had occurred had been established in official records.