Thousands rally in Tokyo to protest state funeral for Abe

An estimated 4,000 people gathered in Tokyo on Aug. 31 to protest the planned state funeral for former Prime Minister Shinzo Abe. 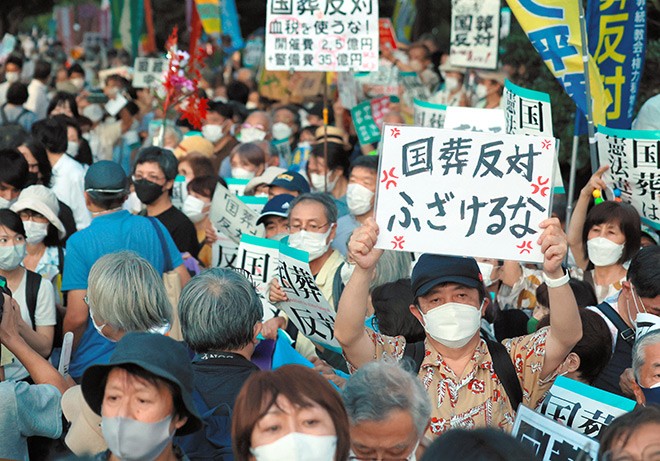 Protesters in front of the Diet building in Tokyo on Aug. 31 demand the government drop its plan to hold a state funeral for former Prime Minister Shinzo Abe. (Tetsuro Takehana)

An estimated 4,000 people protested around the Diet building in Tokyo on Aug. 31, demanding the government scrap its plan to hold a state funeral for slain former Prime Minister Shinzo Abe.

Demonstrators raised placards that read, “No State Funeral” or “Give up the State Funeral!” in front of the main gate of Japan’s parliament.

The state funeral for Abe is scheduled for Sept. 27 at Nippon Budokan Hall in the capital.

Abe was fatally shot in Nara in July. The suspected gunman in the attack is believed to have held a grudge against the Unification Church and targeted Abe over his ties to the group.

The names of the organizations involved in the Aug. 31 protest reflect their resentment toward Abe’s policies on national security when he was prime minister.

Lawyer Masatoshi Uchida is general secretary of a group called “Senso O Sasenai 1,000 Nin Iinkai (The 1,000-people committee not to let war occur),” one of the organizations constituting the protest organizer.

“The deep relationship between Mr. Abe and the Unification Church has been revealed,” he said at the rally. “Let’s keep loudly raising our voices to protest the state funeral.”

One of the protesters, a 70-year-old homemaker who lives in Yokohama, told The Asahi Shimbun, “Prime Minister (Fumio) Kishida acted in a high-handed manner by suddenly coming up with the idea of holding a state funeral without any discussions, and then trying to force it through with just the approval of his Cabinet.”

She also criticized Kishida’s announcement on Aug. 31 that he plans to provide an explanation about the state funeral at a Diet session.

“He felt like giving an explanation only after criticism became widespread,” she said. “He is too inconsistent.”

A 17-year-old second-year high school student living in Nagareyama, Chiba Prefecture, found out through Twitter about the plan for the rally. It was the first time he took part in a protest.

“I’m not convinced that as much as 250 million yen ($1.8 million) has to be spent on the state funeral when students are having a hard time amid the COVID-19 pandemic,” he said. “Hashtags to show opposition to the state funeral are being shared on social media. I want Kishida to reconsider (the plan) and not ignore the (people’s voices).”

Naoto Mori, a 70-year-old protester from Urayasu, Chiba Prefecture, offered another reason to oppose the state funeral for Abe.

“I don’t believe Abe deserves a state funeral because questions raised about (Abe’s possible involvement in the scandals at) Moritomo Gakuen and the Kake Educational Institution haven’t been answered,” he said. “I cannot believe taxpayers’ money will be spent (on his state funeral).”

(This article was written by Yosuke Watanabe and Yusuke Nagano.)