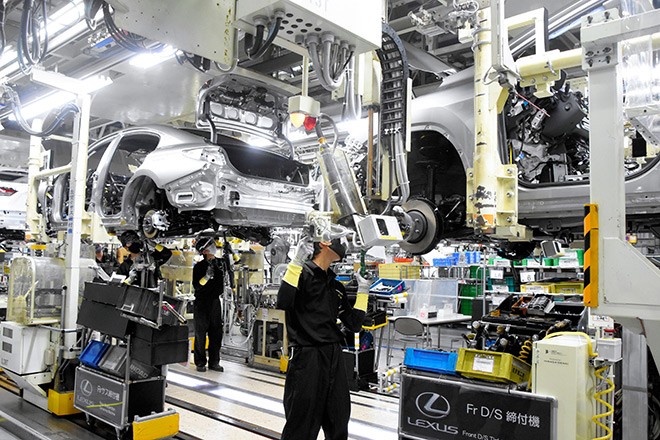 Toyota Motor Corp. and Nippon Steel Corp. have hammered out a 20 to 30 percent price hike for the steel supplied to the major automaker, sources said.

It is believed to be the largest price increase for steel materials the two have ever agreed to.

Analysts believe the new arrangement between the largest players in their respective industries could have a ripple effect on the price of steel materials for manufacturers across other industries, such as electrical appliances and shipbuilding.

Analysts said the agreement could push up prices across a wide-range of industrial products--not just vehicles.

Toyota and Nippon Steel negotiate the price for steel materials every six months, taking into account the current prices of coal and iron ore, which are needed to produce the steel.

Sources said they recently agreed that the price for the second half of fiscal 2022, starting in October 2022 and ending in March 2023, will be approximately 40,000 yen ($285) higher per ton than the first half of the fiscal year.

But the latest increase is twice that, and sources described it as unusually large.

The steel materials Toyota purchases from Nippon Steel will shoot upward in price for the third agreement in a row.

The main reason behind the ballooning cost is that other natural resources, such as coal, have also spiked in price, partly due to Russia’s invasion of Ukraine.

The rapid recovery of the global economy from the COVID-19 pandemic has also promoted production activities and construction projects by companies, in turn leading to higher demand for natural resources and materials.

Analysts said the rapid deprecation of the yen has also come into play.

Although Toyota has not raised its vehicle prices recently, it may be forced to begin mulling whether it will need to do so following the new price arrangement.

Mitsubishi Motors Corp. and Mazda Motor Corp. have both decided to hike prices for some models.

Nissan Motor Co. announced on Sept. 1 that it will raise the price of the Leaf, its electric car brand.

Observers said ratcheting up the prices for new cars could become a more widespread trend in the automotive industry because of the strong inflationary pressures that companies are facing.

And the trend would not end with cars. Many other industrial products also need steel materials for production.

Observers said the agreement between Toyota and Nippon Steel will affect prices for shipbuilding, manufacturing electrical appliances and construction machinery and producing construction materials as well.

The markups could be passed on to consumers if companies in these industries do not absorb the cost increases.

(This article was written by Takeshi Narabe and Eisuke Eguchi.)