Defense Ministry not giving up on sea-based Aegis Ashore system 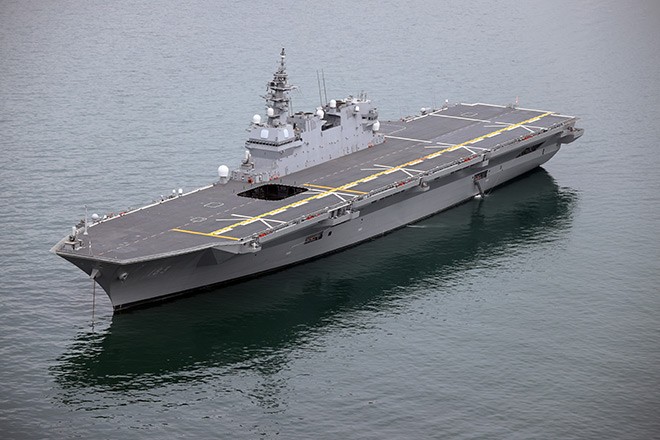 It was forced to consider a sea-based version of the land-based Aegis Ashore missile defense system after the costs were determined to be unacceptable. But initial estimates of the sea-based system came to about double the figure.

Defense Ministry sources said officials were considering submitting a request in the fiscal 2024 budget for construction of a destroyer on which the Aegis Ashore system would be installed.

But the planned warship would be no ordinary destroyer. It would be comparable in size to an aircraft carrier, effectively making it the largest vessel in the Maritime Self-Defense Force fleet.

The Defense Ministry disclosed its requests for the fiscal 2023 budget on Aug. 31 and among the items included were design expenses for the vessel and purchase of engines.

Officials are trying to include construction costs in the fiscal 2024 budget request so the destroyer can be commissioned by the end of fiscal 2027.

The draft blueprint calls for a vessel with a displacement of about 20,000 tons. It would measure 210 meters from stern to bow and have a maximum width of 40 meters.

The largest destroyers in the MSDF fleet are the Maya-class vessels. They have a displacement of 8,200 tons and are 170 meters long and 21 meters wide.

The Izumo destroyer, which is being retrofitted to become in effect an aircraft carrier, has a displacement of 19,950 tons and is 248 meters long and 38 meters wide.

Defense Ministry officials said the huge size of the planned destroyer was the only way to reduce swaying of the vessel at sea as the Aegis Ashore system onboard tries to track and intercept incoming ballistic missiles.

The recent budget request submittal included items such as radar to track ballistic missiles as well as technology to deal with hypersonic missiles that travel at speeds in excess of Mach 5. But no monetary figure was included for the cost of those items.

Sources said the total cost of constructing two destroyers for the sea-based Aegis Ashore system would likely come to 1 trillion yen. But no request for construction was included among the requests for the fiscal 2023 budget because the project, including the design, is still in its infancy.

Defense Minister Yasukazu Hamada told a Sept. 2 news conference the planned destroyer “was extremely important as the nation moved to fundamentally bolster its defense capabilities over the next five years.”

This was in reference to the government's plan to raise defense spending to 2 percent of gross domestic product (GDP).