An Argentine ant backs away and self-grooms one of its antennae after touching a pheromone found in Japanese carpenter ants. (Partially modified from supplementary material for Frontiers in Physiology; provided by the research team) 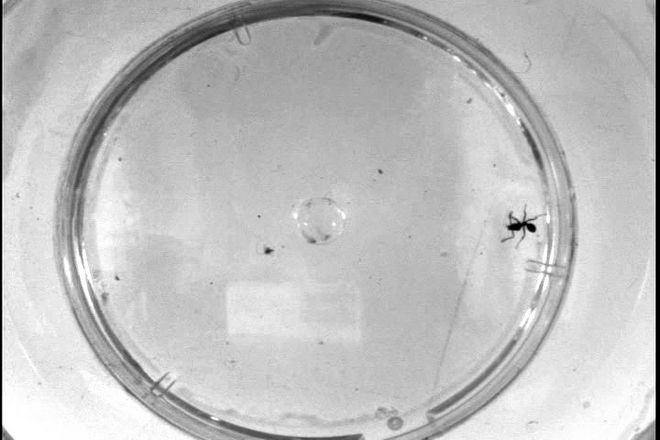 An Argentine ant backs away and self-grooms one of its antennae after touching a pheromone found in Japanese carpenter ants. (Partially modified from supplementary material for Frontiers in Physiology; provided by the research team)

NARA--The use of smell could be a key weapon in repelling and controlling invasive ant species from South America, scientists learned.

The researchers from Nara Women’s University and other institutions said a whiff of a pheromone found naturally on the body surface of the Japanese carpenter ant, a native species, causes the invasive ants to flee.

Japan has designated the Argentine ant and the venomous red imported fire ant, both native to South America, as “invasive alien species.”

Both species are small in stature, but hundreds of their queen ants can inhabit a single nest, enabling a colony to grow at an explosive rate.

The invasive ants have entered human habitats, and are having an impact on ecosystems, farming and human health, the researchers said.

Mamiko Ozaki, an outside collaborator with the Nara Women’s University Institute of Yamato Area and Kii Peninsula, has been studying the working mechanisms of ant pheromones, which are chemical substances that work on the sense of smell.

Ozaki, 67, and other team members tested 35 types of pheromones from the body of the Japanese carpenter ant, which inhabit almost all areas of Japan, including residential neighborhoods.

The scientists applied the pheromones at 10 different dose levels on a small bead attached at the tip of a glass rod, with which they touched the antennae of the invasive ants.

A pheromone called (Z)-9-tricosene prompted Argentine ants to flee. After they backed away, they intensively self-groomed their antennae in a way reminiscent of humans blowing their nose.

The scientists also discovered that (Z)-9-tricosene activated broad regions of the ants’ brains that are responsible for discriminating between friend and foe.

Ozaki said the Japanese carpenter ant pheromone likely led the South American ants to assume the presence of a dominant foe and activated a switch for fleeing without fighting.

“The pheromone, which is not toxic, could be used on a compact scale, such as applying it to the base of a wall to prevent invasive ants from climbing up,” she said. “It could serve as a new key weapon for repelling them.”

The research results were published in Frontiers in Physiology, an international journal.