Students striving to restore piano made by Chopin’s favorite maker 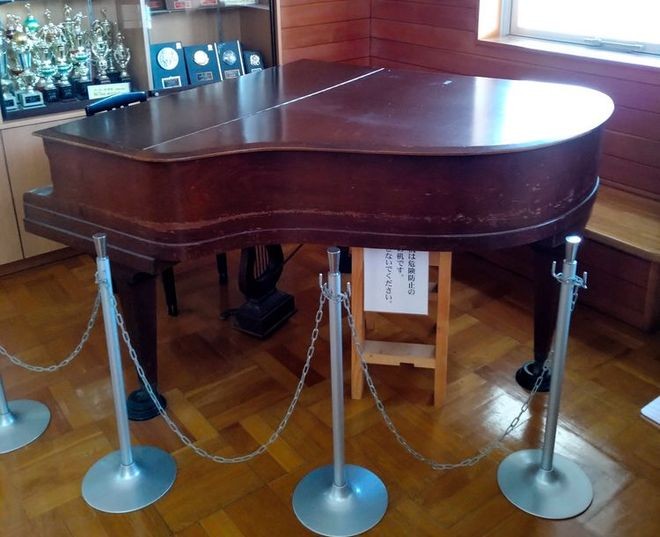 SUZAKA, Nagano Prefecture--An old piano sat forgotten and abandoned under the stairs of the first floor of the city-run Azuma Junior High School here for decades.

The aged instrument had fallen into a sad state of disrepair, with some of its strings broken and the ivory strips covering the keys flaking away.

But that all changed after last winter when Principal Hiroyuki Shimada, 61, learned about the pedigree of the piano while he was sorting through documents in his office.

The principal discovered that it was manufactured about 100 years ago by Pleyel, a distinguished piano manufacturer founded in France in the early 19th century.

Pleyel pianos are fabled for their scarcity and are believed to have been cherished by the famed Polish composer and pianist Frederic Chopin (1810-1849).

Now, students are working on a project to restore the piano, raising funds and engaging in promotional efforts. They are even helping on the repair work with their own hands.

According to school officials, the piano was manufactured in 1924.

It was donated by Ukyo Yamagishi, a late industrialist who hailed from the city, in 1958 just before the school opened.

It had apparently been placed in the school's music hall, which was also built with financial support from Yamagishi.

But when the school building underwent repairs in or around 1995, the piano was left under the stairs.

After Shimada found out about the piano's history, he suggested that students conduct research on Yamagishi and the piano as part of their winter break assignments.

After doing their research, the students said they wanted to give a new life to the aged instrument.

According to a piano tuner working at the school, Pleyel pianos are rarely available in the pre-owned market and bring high prices if one can be found.

But this piano was in a particularly dilapidated condition.

There are only a few technicians with the knowledge to work on the instrument, while no spare parts are available.

In April, students discussed ways to restore the piano and make it playable again as part of the "integrated studies" for the 140-student school.

They launched a project to repair the piano and divided students into three teams, each assigned with the task of "planning events," "raising funds" and "spreading information."

Then they decided to ask a pianist to perform a gig with the piano after its restoration during the school's cultural festival scheduled for Oct. 2.

The restoration project kicked off in late June.

The piano was brought into the gymnasium, with all of the students taking apart the instrument and cleaning each part under the tutelage of the tuner.

They decided to remake the music stand parts, the prop stick and other missing pieces.

"I'm excited to breathe life into the piano," said Momoko Tanaka, 15, a third-year student who leads the event planning team.

Members of the fund-raising team discussed ideas, including seeking cooperation from companies as they promote the project and selling placemats, as well as herbs and flowers they have grown at the school.

"We want to raise a lot of money," said third-year student Sogo Matsumoto, 14.

Members of the team tasked with spreading information shot videos of the students taking apart the piano and cleaning the parts to promote their efforts.

Having already shot footage of a student playing Chopin's "Nocturne" with the piano before its restoration, they also plan to make a video to show how the piano sounded before and after the repair.

HOW THE PIANO SOUNDS

Their preparations continued to go smoothly.

It was decided that classical pianist Takashi Yamamoto, a Nagano city native, who came in fourth at the prestigious International Chopin Competition, would be asked to play the piano at the cultural festival.

When the students asked Yamamoto's agency in July if he would be available to perform, the company was only too willing to agree.

The students also continued their efforts during their summer vacation.

In addition to visiting local companies, they sold herbs and flowers to parents and guardians and raised about 400,000 yen to repair the piano.

The upcoming festival is feeding growing expectations among the students eager to hear how the restored piano sounds in the hands of a Chopin master like Yamamoto.