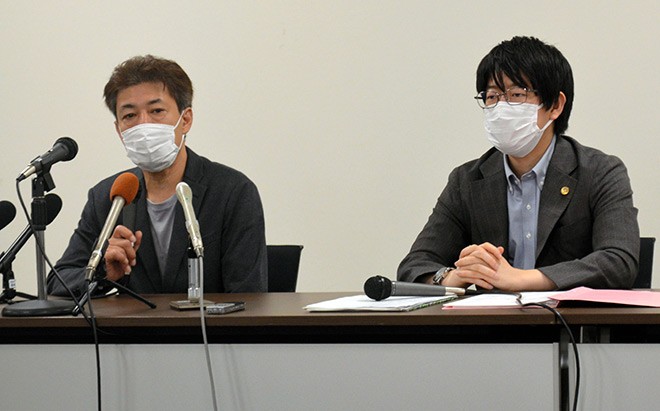 Takahiro Otaki, left, announces the inauguration of an Amazon drivers’ labor union during a news conference in Nagasaki on Sept. 5. (Atsushi Misawa)

A labor union of 15 drivers delivering Amazon parcels in Nagasaki gave a news conference on Sept. 5 to mark its inauguration.

The union, which calls itself the Nagasaki branch of the Amazon drivers’ labor union, is the second such initiative in the nation, following one established in June in Yokosuka, Kanagawa Prefecture.

Experts say Amazon drivers in some areas of the Kanto region are also working to set up unions.

Drivers are currently treated as “sole proprietors” who are contracted out from subcontracting delivery companies for the Japanese arm of Amazon.com.

Under labor law, sole proprietors are not eligible for protection in terms of working hours and overtime pay.

However, they maintain they are, in effect, “Amazon’s workers” since the e-commerce giant’s app monitors their hours and delivery destinations.

A representative of the drivers in Nagasaki said their outsourcing delivery contract is actually “fake” and does not reflect their reality.

“Amazon and the subcontractor tell us what to do,” the representative said.

The union demanded that Amazon and the subcontractor conclude a service contract with them, cut long working hours, raise daily pay--which they say is lower than other parts of Japan--and provide funds to buy gas, which they have to pay themselves under the current arrangement.

“I asked a manger of the subcontractor to increase my daily allowance since the number of parcels has risen since around spring but the manager said no,” said Takahiro Otaki, 50. “Nagasaki has many hills, and we cannot drive to the door of our customers’ homes. Such particular circumstances in Nagasaki should be taken into consideration.”

The Yokosuka branch of the Amazon drivers’ union called for collective bargaining with Amazon and their subcontractor, asserting long working hours have become routine since the volume of packages they handled daily jumped.

“Parcels have significantly increased since about a year ago, following the introduction of an artificial intelligence system to manage our delivery destinations,” one of the drivers said. “I put in more than 12 hours a day.”

Their situation is improving after the union was formed, according to the union members, as the subcontracting company came to the negotiating table.

Previously, drivers had to work beyond the ceiling of 13 hours a day and 60 hours a week on some days, but not anymore. Some drivers said Amazon warehouse managers have also become more polite.

“Our work environment has improved a great deal,” said a driver in his 40s.

But Amazon would not negotiate with the drivers at the Yokosuka branch.

“Drivers are doing their jobs under contract with our subcontractor and they are not our employees,” the Amazon side said. “The subcontractor is responsible for drivers’ employment, contracts, operation management and payments.”

(This article was written by Atsushi Misawa and senior staff writer Takehiko Sawaji.)