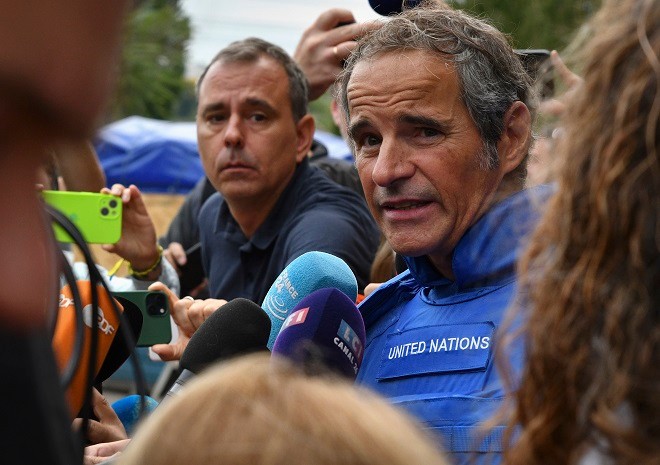 KYIV, Ukraine--The U.N. atomic watchdog agency urged Russia and Ukraine on Tuesday to establish a “nuclear safety and security protection zone” around the Zaporizhzhia power plant amid mounting fears the fighting could trigger a catastrophe in a country still scarred by the Chernobyl disaster.

“We are playing with fire, and something very, very catastrophic could take place,” Rafael Grossi, head of the International Atomic Energy Agency, warned the U.N. Security Council, days after leading an inspection visit to the plant.

In a detailed report on its visit, the IAEA said shelling around the Europe's largest nuclear power plant should stop immediately. “This requires agreement by all relevant parties to the establishment of a nuclear safety and security protection zone" around the plant, it said.

At the Security Council meeting, U.N. Secretary General Antonio Guterres likewise demanded that Russian and Ukrainian forces commit to halting all military activity around the plant and agree on a “demilitarized perimeter.”

Guterres said this would include “a commitment by Russian forces to withdraw all military personnel and equipment from that perimeter and a commitment by Ukrainian forces not to move into it.”

Asked by reporters about establishing a demilitarized zone, Russia’s U.N. ambassador, Vassily Nebenzia, said the proposal “is not serious.”

“The Ukrainians will immediately step in and ruin the whole thing. We’re defending, we’re protecting the station,” he said. “In fact, it is not militarized. There is no equipment at the station.”

Speaking to journalists later, Nebenizia said Russia wanted to see details of the proposals for demilitarized and protection zones.

Ukrainian President Volodymyr Zelenskyy said his country needs to look at the specifics of the protection-zone proposal and could support the measure if it envisions the demilitarization of the plant.

In his nightly address to the nation, Zelenskyy praised the IAEA report’s “clear references” to the presence of Russian troops and military equipment at the plant. He urged the agency to explicitly back Kyiv’s long-held position that Russian forces need to withdraw from the facility and its surroundings.

Shelling continued around the plant on Tuesday, a day after it was again knocked off Ukraine's electrical grid and put in the precarious position of relying on its own power to run its safety systems.

Normally the plant relies on power from the outside to run the critical cooling systems that keep its reactors and its spent fuel from overheating. A loss of those systems could lead to a meltdown or other release of radiation.

“For radiation protection professionals, for the Ukrainian and even the Russian people, and those of central Europe, this is a very worrying time — and that’s an understatement,” said Paul Dorfman, a nuclear safety expert at the University of Sussex in England.

Russia and Ukraine accused each other of shelling Enerhodar, the city where the plant is situated. The Ukrainians also charged that the Kremlin's forces fired on a town across the Dnieper River from the power station.

The Ukrainian mayor of Enerhodar, Dmytro Orlov, reported a powerful blast in the city around midday. The explosion left the city of 53,000 cut off from its power and water supplies. It wasn’t immediately clear what caused the blast.

World leaders have called for the demilitarization of the plant, which has been occupied by Russian forces since the early days of the war but is being run by Ukrainian engineers.

In its report, the IAEA did not assign blame for the shelling at the plant. The agency has sought to keep out of the political fray.

In addition, the IAEA warned that the Ukrainian staff operating the plant under Russian military occupation is “under constant high stress and pressure, especially with the limited staff available” — a situation that could "lead to increased human error with implications for nuclear safety.”

It recommended that “an appropriate work environment, including family support," be reestablished.

The IAEA also said the staff is not being given unrestricted access to some parts of the plant and must get permission from the Russian occupying forces to reach the cooling ponds where spent fuel is kept. Grossi expressed concern that that could hamper the staff's response in an emergency.

The report said the team saw Russian military personnel, vehicles and equipment at various locations, including several military trucks on the floor of two turbine halls. It called for “the removal of vehicles from areas that could interfere with the operation of safety and security systems and equipment.”

Two inspectors from the IAEA mission remained at the plant, a decision welcomed by Ukrainian presidential adviser Mykhailo Podolyak.

“There are Russian troops now who don’t understand what’s happening, don’t assess the risks correctly,” Podolyak said. “There is a number of our workers there, who need some kind of protection, people from the international community standing by their side and telling (Russian troops): ‘Don’t touch these people, let them work.’”

On Monday, the IAEA said Ukrainian authorities reported that the plant’s last transmission line linking it to the nation's power grid was disconnected to allow workers to put out a fire caused by shelling.

Ukrainian Energy Minister Herman Halushchenko told Ukrainian television: “Any repairs are impossible at this point — there are ongoing hostilities around the plant.”

In the meantime, the plant’s only remaining operational reactor will “generate the power the plant needs for its safety and other functions,” the IAEA said.

Mycle Schneider, an independent analyst in Canada on nuclear energy, said that means the plant was probably functioning in “island mode,” or producing electricity for its own operations.

“Island mode is a very shaky, unstable and unreliable way to provide continuous power supply to a nuclear plant,” Schneider said. He said that "many if not most islanding attempts fail.”

The Zaporizhzhia plant has diesel emergency backup generators to produce power to run the place if the outside source is disrupted. But Schneider said the plant's operators may have decided to go into island mode first.

If the plant turns to the diesel generators as a last resort and they fail, the reactor and the spent fuel could rapidly overheat, he said.

Experts say the reactors at Zaporizhzhia are designed to withstand natural disasters and even plane crashes, but the unpredictable fighting has repeatedly threatened the cooling systems. Ukraine in 1986 was the site of the world's worst nuclear accident, the explosion at Chernobyl.

Ukrainian intelligence reported that residents of Enerhodar were fleeing the city out of fear. Ukraine’s Deputy Prime Minister Iryna Vereshchuk said Russia should organize safe corridors for women and children living nearby.

"People en masse are reaching out to us for help. They are trying to leave the dangerous territory, but there are no corridors,” Vereshchuk told Ukrainian TV.

Meanwhile, gunfire and explosions were heard Tuesday afternoon in the Russian-occupied city of Berdyansk in southastern Ukraine, with Russia's state-run media reporting that the car of the Kremlin-installed “city commandant” had been blown up. The RIA Novosti news agency said that the official, Artem Bardin, was in serious condition and that a shootout followed the assassination attempt.

The agency quoted Russian-backed local officials as saying they had launched a manhunt for the “Ukrainian saboteurs” responsible.