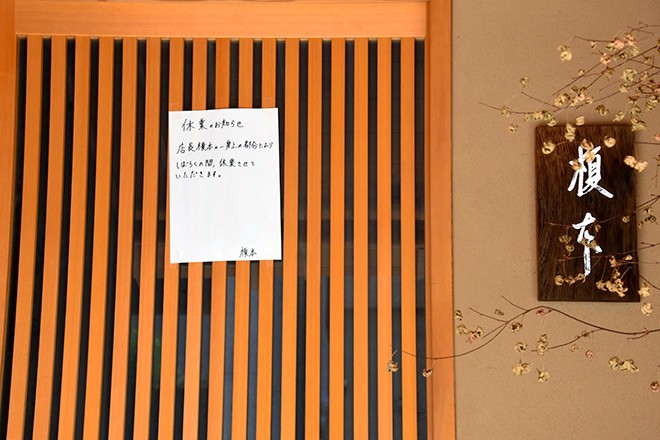 A sign on the entrance to the Enomoto restaurant in Osaka says operations will be temporarily suspended. (Eriko Kai)

OSAKA--A Japanese restaurant here that received a coveted star in the Michelin Guide will not be opening its doors in the near future after two customers complained of being drugged and sexually assaulted.

Masaya Enomoto, 46, the owner-chef of the Enomoto restaurant in Osaka’s Naniwa Ward, has been indicted on two charges of quasi-forced sexual intercourse.

Police believe he drugged female customers at his restaurant and sexually assaulted them while they were unable to resist.

According to investigative sources, the first incident occurred in late December 2021. Enomoto served an alcoholic drink spiked with sleeping pills to the customer and sexually assaulted her.

Enomoto is suspected of using a similar method in sexually assaulting another woman in late February.

Enomoto was arrested in June and August for the two incidents, and the Osaka District Public Prosecutors Office subsequently handed down indictments.

According to a source in the same business, Enomoto originally worked for a noted Japanese restaurant in Osaka before opening his own restaurant two years ago. The cozy establishment has only six seats at the counter and reservations are required.

A sign posted on the entrance to the restaurant said it would not open for the time being due to personal circumstances related to the owner.