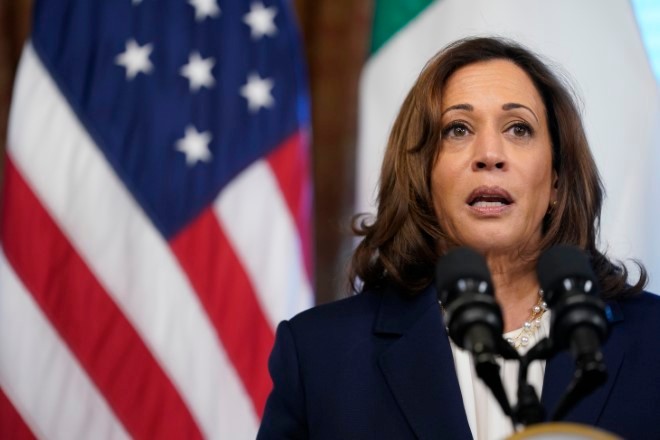 Vice President Kamala Harris speaks during a meeting in her ceremonial office on the White House complex in Washington, Sept. 2, 2022. (AP Photo)

WASHINGTON--U.S. Vice President Kamala Harris will travel to Tokyo later this month to attend the funeral of slain former Japanese Prime Minister Shinzo Abe, followed by a trip to South Korea, a spokeswoman said on Wednesday.

“Her visit will honor the legacy of Prime Minister Abe and underscore the importance of his leadership in championing the alliance between the United States and Japan and advancing a free and open Indo-Pacific,” Harris’ press secretary, Kirsten Allen, said.

Abe, the longest-serving leader in modern Japan, was fatally shot from close range during a campaign rally on July 8.

The visit from Sept 25-29 marks Harris’s second trip to Asia.

In August 2021, she visited Singapore and Vietnam to bolster economic and security ties with the two countries. It came at a time when the Biden White House was aiming to refocus U.S. foreign policy strategy on competing with China’s rising economic influence rather than on continuing to fight the two-decade long conflict in Afghanistan.

During the trip, Harris rebuked China and sought to fortify the image of the United States as a credible ally for countries in the region.

She also said the United States welcomes competition and does not seek conflict with Beijing, but it will speak up on issues like maritime disputes in the South China Sea.

Her meetings with senior government officials in Tokyo and South Korea this month will focus on America’s shared economic and security interests in the region and show its commitment to a free and open Indo-Pacific, Allen said.