A cyborg cockroach turns in the direction in accordance with instructions given wirelessly. (Video provided by the Riken research institute) 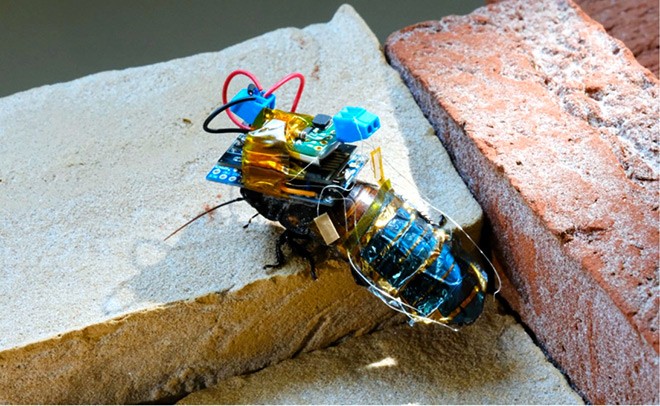 Researchers converted a cockroach into a robot that could be someday deployed in disaster areas too dangerous for human search and rescue personnel to enter.

The scientists, primarily from the Riken research institute, said a Madagascar hissing cockroach fitted with a ultrathin solar cell and a Bluetooth short-range wireless communication unit turned right or left in accordance with their instructions.

“We may be able to mobilize cyborg insects to find people buried under debris in a disaster if we can put a thin temperature sensor on the bugs,” said Kenjiro Fukuda, a senior research scientist at Riken.

A power generator is essential for controlling the movements of insects and collecting data from them.

Fukuda and his colleagues developed a 4-micrometer-thick solar cell, the world’s thinnest, to not impair the motion abilities of insects. The battery can be recharged as long as the insects are alive.

The research team said the 6-centimeter-long Madagascar hissing cockroach mounted with the solar cell could easily right itself when it was turned over during an experiment.

The Bluetooth unit was placed on the upper part of the cockroach’s body.

Cockroaches have a pair of sensory organs called cercus on the rearmost segments of their abdomen. Stimulating the right cercus makes them turn right, and vice versa.

The scientists applied stimulation to the cyborg cockroach’s right cercus via radio communications and confirmed that it quickly turned to the right.

While developing a smaller wireless communication unit remains as a challenge, Fukuda said the technology can be applied to many fields, depending on the types of sensors to be installed.

“We will work to improve the solar cell’s performance, such as increasing power generation capacity,” he said.

The team’s findings have been published in the online edition of the scientific journal npj Flexible Electronics.