Extreme heat that marked this past summer 240 times more likely 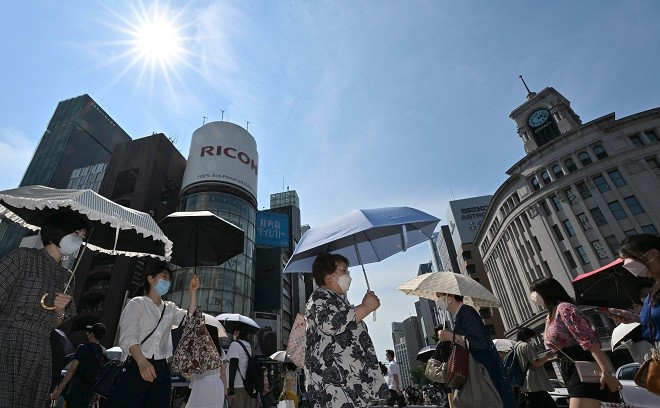 This image shows the upscale Ginza district of Tokyo’s Chuo Ward on July 2, as the mercury hit 35 degrees or higher on 14 days, the most ever, in central Tokyo in summer 2022. (Asahi Shimbun file photo)

Global warming has increased by 240-fold the probability of extreme heat that
hit Japan from late June to early July, according to a study.

The findings showed that the effects of global warming were now scientific fact, in addition to those of meandering westerly winds and the La Nina oceanic and atmospheric phenomenon, researchers from the Japan Meteorological Agency’s Meteorological Research Institute, the University of Tokyo and Kyoto University said Sept. 6.

“Global warming stemming from humankind’s activity has turned out to be a direct cause of higher temperatures,” said Masahiro Watanabe, a meteorology professor at the University of Tokyo, who is part of the team. “If temperature levels continue to increase, the likelihood and intensity of abnormal climate will rise further.”

According to data from the JMA, the average temperature in late June was 4.0 degrees and 3.2 degrees higher than usual in eastern and western Japan, respectively. The readings were the hottest since the current form of measurement started in 1946.

However, the JMA’s Climate Prediction Division also said that “the effects of global warming” are another factor behind the extreme heat.

For its analysis, the joint research team took advantage of a method known as event attribution.

The results showed temperatures would rise to record high levels seen between June 21 and July 2 with a probability of 19.8 percent under a scenario characterized by both the La Nina phenomenon and global warming.

The likelihood declined to 0.082 percent in situations where La Nina exists alone with no global warming impact.

The findings suggest extreme heat can be reported every five years as a result of global warming, although that would arise only once in 1,200 years if global warming was not happening.

Based on the same method, the team in 2019 found extreme heat in July 2018 would not have occurred without global warming.

The latest findings were released in preliminary format because estimates by the JMA were partially used for seawater temperatures and other values.

(This article was written by Ryo Sasaki and Shinichi Sekine.)