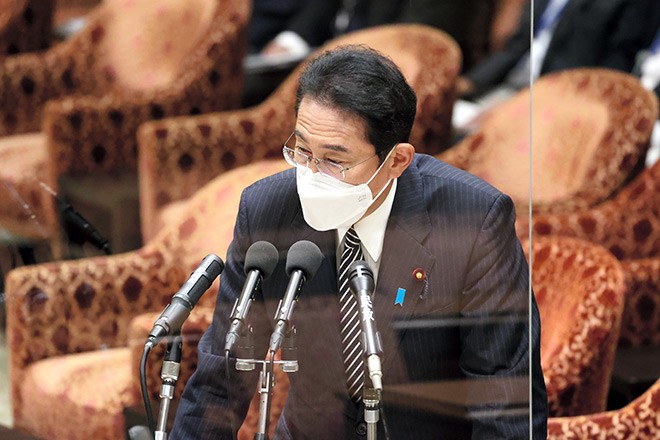 Prime Minister Fumio Kishida broke with security protocols and named some of the foreign leaders who will attend the state funeral for former Prime Minister Shinzo Abe on Sept. 27.

Although the Diet is not currently in session, the rules committees for the two chambers held special meetings on Sept. 8 so government officials could be questioned about the decision to hold the state funeral, which is only the second ever for a former prime minister.

Those handling security arrangements for the foreign dignitaries planning to attend initially wanted to release the names only about three days before the event.

Kishida said he plans to hold meetings with as many foreign leaders as he can to demonstrate to the world his resolve to “carry on and develop the diplomatic legacy fostered by former Prime Minister Abe.”

A Foreign Ministry source said the announcement is unusual since the “schedules of foreign dignitaries can change at the last minute.”

“From a security standpoint, it is also unthinkable to reveal the names beforehand,” the source said.

The ministry had planned to release the list of attendees three days prior to the funeral because officials are still trying to contact nations that have not yet responded.

But a source said the government obtained consent for Kishida to disclose the names of leaders planning to attend so far.

At the meeting, Kishida was asked why he opted for a state funeral, which has proven to be controversial, rather than follow the standard practice used when other past prime ministers had died, where the funerals were jointly organized by the Cabinet and the ruling party.

Kishida touched upon Abe’s prominence as a longstanding leader the world grew to know and pointed to the approximately 1,700 condolence messages received from abroad after Abe’s slaying.

“Most were addressed to the entire Japanese population, so I felt there was a need to hold a state funeral so that Japan could properly respond to the condolences and respect expressed from abroad,” Kishida said.

But opposition lawmakers are blasting Kishida for not explaining to the public why Abe should get a state funeral before the Cabinet approved the plan on July 22.

Kishida announced his intention to hold the state funeral six days after Abe was assassinated in Nara city on July 8 while giving a campaign speech for an Upper House candidate.

Kenta Izumi, head of the main opposition Constitutional Democratic Party of Japan, said that decision was “hastily made.”

Public polls have shown that most respondents oppose holding the state funeral. And about 200 protesters gathered in front of the prime minister’s office on Sept. 8 to voice their opposition.

One factor driving the negative public sentiment is the numerous reports about ties Abe had with the Unification Church.

Abe’s accused assailant, Tetsuya Yamagami, told police he held a grudge against the church, now formally known as the Family Federation for World Peace and Unification, because his mother made massive donations that ruined his family's life.

Tetsuya Shiokawa of the Japanese Communist Party said the government cannot obtain public understanding if the funeral is held without first looking into the ties between Abe and the Unification Church.

Kishida did not specifically delve into the ties between Abe and the church.

Because Shiokawa focused so much of his speaking time on the Unification Church, Shunichi Yamaguchi, chairman of the Lower House’s Rules and Administration Committee, told Kishida that he did not have to respond to questions unrelated to the intended topic of the session: the state funeral.

A number of opposition lawmakers called on Kishida to conduct further investigations into the links between Abe and the church, but the prime minister said there were "limitations" to what could be uncovered since Abe was dead.

When Izumi suggested that Abe's staff could be asked to turn over past schedules that may disclose what ties existed, Kishida still said there were limitations to what could be done.

The JCP's Shiokawa pointed to the ruling Liberal Democratic Party's opposition to allowing married couples to choose which surname to use and same-sex marriages as stemming from the close ties between the party and the Unification Church.

The church has long opposed allowing couples to choose which surname to use and same-sex marriages.

Kishida responded, "I do not believe the government was influenced by the views of certain organizations."