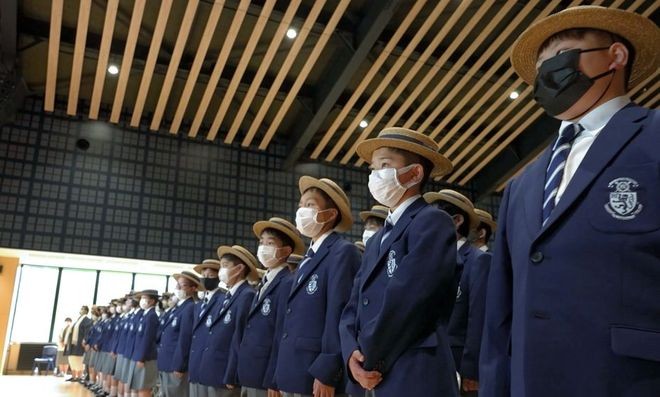 Harrow International School Appi Japan, which has attracted students and teachers from around the world, teaches classes in English and offers lessons in winter sports on the Appi Plateau.

Hachimantai municipal officials hope the name recognition of the school can revitalize the region and serve as a hub for international exchanges.

A road from the Tohoku Expressway leads through the mountains to the plateau, where the school gate with a large emblem stands.

The school grounds boast a total space of about 100,000 square meters, or as big as two Tokyo Domes.

The education facility includes the main school building, a gymnasium, a swimming pool, an auditorium and a library, in addition to student dormitories.

The original Harrow School, located in suburban London, was established in 1572 and is one of the nine independent elite schools in Britain.

The Appi academy is the 10th member of the Harrow family of schools.

The first nine affiliated schools are all located in big cities, such as Bangkok, Beijing, Hong Kong and Shanghai.

Hachimantai city, on the other hand, has a population of about 24,000, and nearly 80 percent of its area is forested.

Michael Farley, the first head of Harrow Appi, said the rich natural environment is ideal for a boarding school and that he hopes pupils will grow both mentally and physically in a safe environment away from the hustle-bustle of city life.

Under a British-style education, the school teaches seventh- to 13th-graders (equivalent to sixth-graders to third-year high schoolers in Japan).

For the inaugural academic year, Harrow Appi received about 180 students ranging from seventh- to 10th-graders (sixth-graders to third-year junior high schoolers) from 12 countries, including Britain and the United States. Most of them are from Japan and other Asian nations.

The school intends to welcome 900 students over the next couple of years.

Harrow Appi’s curriculum follows Harrow School’s emphasis on language learning, and 80 percent of its about 40 teachers are from Britain.

In addition to offering winter sports classes, the school teaches art and chess, two subjects that are considered extracurricular activities in Japan.

There are two dormitories, or “houses,” for male students and two for female students. They are all encouraged to foster teamwork regardless of their academic year.

Teachers take turns staying at the dorms to help students with their studies.

Its school life is reminiscent of the world of “Harry Potter.”

Harrow Appi is categorized as a “miscellaneous school” under the School Education Law.

Students who complete the curriculum are not qualified for a Japanese high school diploma, but they can obtain the British equivalent.

Although the tuition fee, combined with the boarding charge, totals more than 8 million yen ($56,000) a year, subsidies from the prefectural government are not available.

Morioka-based Iwate Hotel & Resort Inc., which operates a ski resort on the Appi Plateau, came up with the idea of using the prestigious institution to help revitalize the community.

In a bid to enhance its international brand power, the company in 2017 asked Harrow School, which had affiliate schools in Asia, to open a school here.

The two sides agreed to open the academy using a plot of land and school buildings prepared by the company and leased to Harrow Appi.

Iwate Hotel & Resort envisions it will also attract medical institutions and commercial facilities, eventually bring in immigrants from around the world and increase the number of permanent residents to 10,000.

In fact, 90 percent of the 200 school staff members live in Appi, according to the company.

“The opening of the school has stimulated exchanges in the community and also made it more international,” said Penny Luo, general manager of the company’s urban planning business and future development division.

The prefectural and city governments also have high hopes for Harrow Appi.

Iwate Prefecture has appointed its local development office to serve as a liaison with Harrow Appi, not its academic affairs promotion division, which oversees private schools.

The prefecture also decided to include 164 million yen in its annual budgets for the next five years starting from April 1 this year to provide subsidies for the stable management of the school.

The Hachimantai city government is providing 164 million yen in subsidies to the school this fiscal year.

The two local governments and Harrow Appi signed a partnership deal on Aug. 1 to encourage community revitalization and promote exchanges with residents.

The officials believe the students will be given opportunities to interact with local children through sports and learn about Japanese traditions.

“We expect it will improve the educational environment in Iwate (Prefecture) and promote the understanding of multicultural inclusiveness,” Governor Takuya Tasso said during the signing ceremony.

Mayor Takahiro Sasaki added, “I’m sure that it will help raise the profile (of Hachimantai) as an international city, boost exchanges and attract tourists.”