Mosque in northern Japan a lifeline for Muslim interns 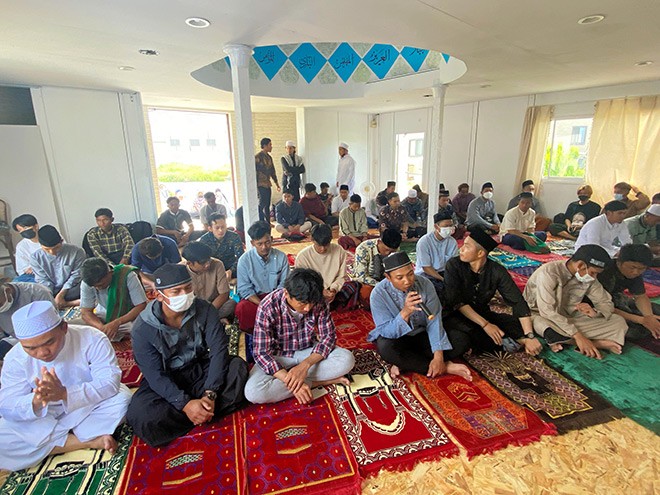 ISHINOMAKI, Miyagi Prefecture--A mosque at a fishing port in this corner of northeastern Japan might seem incongruous to some people, but not to the many Muslims from Indonesia, Bangladesh and elsewhere who work as technical trainees in the local seafood and construction industries.

The mosque, which was completed in July, is an essential cornerstone of their daily lives, where greetings of “as-salamu alaykum” (peace be upon you) ring out as young people in ethnic clothes enter the building topped with a white dome.

Women wearing headscarves lay out mats for prayers outside the building.

More than 100 people turned up at the Ishinomaki Mosque to celebrate the Feast of the Sacrifice, one of the most important events for Islamic believers, this summer.

Many of the worshippers came to Japan from Indonesia and elsewhere to work for seafood processing manufacturers, fishing boat operators and the construction industry.

Technical interns have become increasingly indispensable for this port city facing the Pacific Ocean, which has been suffering from a labor crunch since the 2011 earthquake and tsunami disaster that claimed about 20,000 lives.

A 51-year-old Bangladeshi who runs a small construction company built the mosque. Trainees and others showed up at the building site by bicycle on their off days to help paint and weed.

A 27-year-old Indonesian explained that the mosque was essential to him as “I used to have no choice but to go to a mosque in Sendai by train for Friday prayers.”

As a crewman on a trawler for seven years, the Indonesian said his work is tough. As he misses his hometown, the mosque is like a home away from home for him to see his compatriots from other workplaces.

The Bangladeshi president said he had been concerned about public prejudice against Islam in Japan when he embarked on the mosque construction project.

He visited the city office and the local neighborhood association beforehand, telling them that the facility “has no links with extremists or terrorists whatsoever.”

Plans call for the mosque to be expanded later to accommodate a library and a restaurant to serve food specially prepared for Muslims in halal fashion.

“I expect the establishment to provide a place for those from various countries and cultures to interact with one another so as to deepen mutual understanding,” the president said.