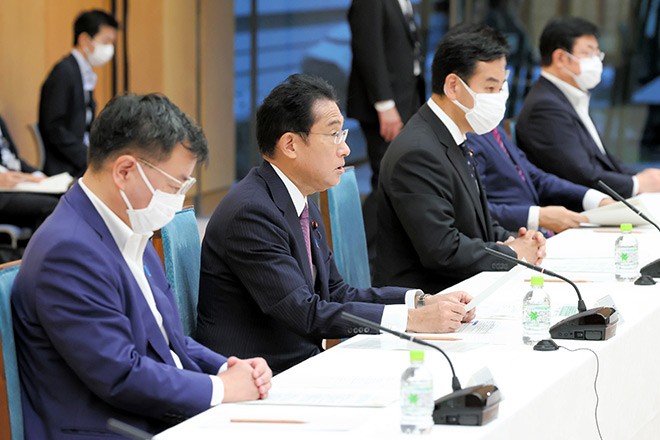 Cash handouts and subsidies for gasoline and wheat imports are among a package of measures approved by the government Sept. 9 to deal with soaring prices that are hitting consumers hard.

Along with steps to deal with the novel coronavirus pandemic, about 3.5 trillion yen ($24.6 billion) was allocated from a special reserve fund for the initiative.

Cash handouts of 50,000 yen will be given to around 16 million low-income households to help them meet rising electricity, gas and food prices. This will total around 900 billion yen.

The government pledged to extend subsidies paid to oil wholesalers until year-end instead of Sept. 30 as originally planned. It allows for up to 35 yen per liter in subsidies to keep prices at the pump to around 168 yen per liter. Extending the subsidy program by three months will cost about 1.3 trillion yen, bringing the total by that time to 3.2 trillion yen.

However, the maximum amount of the per-liter subsidy could be lowered over the next few months depending on petroleum price trends, a source said.

The government will also maintain current selling prices to millers of imported wheat beyond October. Another measure to be implemented will help keep down feed prices paid by livestock farmers.

A new program costing around 600 billion yen will allow local governments to use funds allocated to them as they see fit, based on eight categories that include gift certificates to prop up local consumption and support for school lunches.

The latest package complements measures approved in April to help consumers deal with surging consumer prices triggered mainly by the war in Ukraine.

Prime Minister Fumio Kishida pledged during a meeting where the package was approved to continue with further measures depending on future economic trends.

The government also intends to put together a comprehensive package of economic measures in October while drawing up a supplementary budget to pay for the programs. The budget will be one of the key topics for deliberations in the extraordinary Diet session likely to be held in autumn.