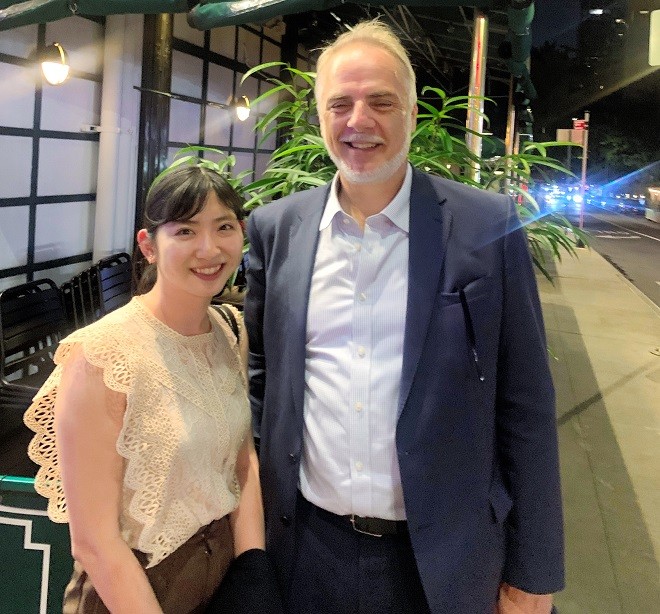 HIROSHIMA--A native of Hiroshima Prefecture studying the issue of nuclear disarmament at a U.S. graduate school had the rare chance to watch up close as talks broke down over the Nuclear Nonproliferation Treaty (NPT).

Shizuka Kuramitsu, 25, was in attendance when the 10th NPT review conference at the U.N. Headquarters in New York failed to adopt a final document because of objections from Russia.

While what she witnessed disheartened her, she said she is trying to stay positive, hoping to one day serve as a representative for the people who have encouraged her from Hiroshima and other parts of the world.

Kuramitsu was in the assembly hall at the time and saw how disappointment and resentment rippled throughout the building as representatives of many nations demanded to speak.

The conference was held over four weeks in August and Kuramitsu stayed in New York during the final week, where she attended and watched dialogue sessions and interviewed nuclear disarmament experts.

The night after the conference ended, Kuramitsu spoke with an Austrian diplomat she looks up to, Alexander Kmentt, on a street not far from the U.N. Headquarters. Kmentt had presided over the first meeting of state parties to the Treaty on the Prohibition of Nuclear Weapons (TPNW) in June.

Kmentt told her that those involved in the talks are working positively, and he encouraged her to continue her studies.

She is currently enrolled in an international relations graduate program at the Middlebury Institute of International Studies in Monterey, California, that focuses specifically on nuclear disarmament.

As a graduate of Hiroshima Jogakuin Senior High School, Kuramitsu had opportunities to take peace education classes, and she took an interest in the international politics of nuclear arms.

She was a third-year student with the girls’ high school in the prefectural capital when she attended a symposium held in Vienna by the Preparatory Commission for the Comprehensive Nuclear Test Ban Treaty Organization.

At the symposium, she called on the participants to make sure children can believe that a world free of nuclear weapons will one day become a reality.

But she also came face to face with the realities of international politics. She met people there who believe there is nothing wrong with the safe management of nuclear arms by responsible nations, even though she thought that view is a far cry from how people in Hiroshima feel about abolishing atomic weapons.

After graduating from high school, Kuramitsu went on to study at a U.S. university to learn about the politics of nuclear weapons and disarmament.

She said people around her tend to perceive nuclear arms abolitionists as “idealists,” so she is cautioning herself against asserting her own views too strongly or denying the views of others.

On Aug. 6, the 77th anniversary of the atomic bombing of Hiroshima, Kuramitsu, who was back in the capital of her native prefecture, moderated a dialogue session between U.N. Secretary-General Antonio Guterres and a group of young people. Guterres was visiting Hiroshima to attend the Peace Memorial Ceremony for the first time.

She said she felt encouraged by the U.N. secretary-general’s remark that nuclear disarmament is extremely important.

On the same day, Kuramitsu accompanied Reiko Yamada, an 88-year-old resident of Tokyo, to visit Hiroshima’s municipal Koi Elementary School, where Yamada was when the atomic bomb exploded above the city in 1945.

The two women have maintained a friendship since Kuramitsu served as an interpreter for Yamada when she spoke five years ago about her experience of the atomic bombing.

“I was in a schoolyard sandbox when the atomic bomb was dropped,” Yamada had told Kuramitsu.

Kuramitsu said as she stood on the same spot where Yamada did that fateful day she felt an acute sense of what a nuclear disaster would be like. She told herself then that this kind of tragedy should never be allowed to occur again.

She said she has always received encouragement from Yamada, who calls her a beacon of “hope.”

Kuramitsu said she keeps thinking about the people of Hiroshima as she continues her studies and searches for an answer to the problem.

She said she hopes that people will start to make ethical consumption choices when it comes to nuclear arms, sort of like how carrying a personal drink bottle can help reduce strain on the environment.

Since she has a soft spot for making sweets, she recently made a cookie mold shaped like a nuclear missile as one small example of this sort of idea. People can nibble away at the cookies to show their support for abolishing atomic weapons. Part of the proceeds from the cookie molds will be donated to nuclear arms abolition campaigns.

“I think we should diversify our approaches so more people will take an interest in the matter,” she said. “Perhaps what I should do now is coming up with more options.”