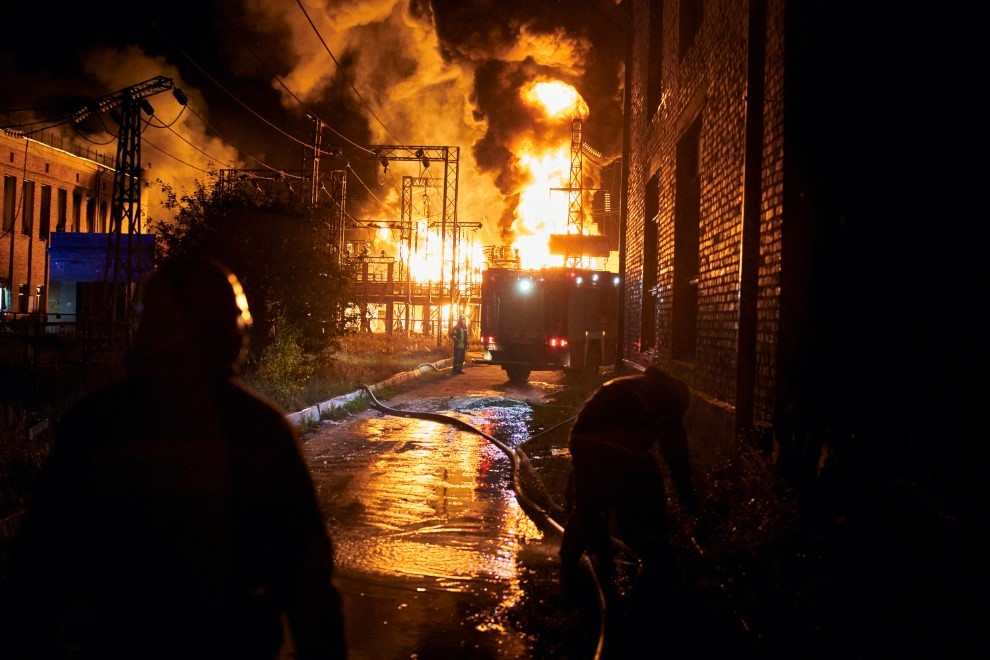 KYIV, Ukraine--Russia attacked power stations and other infrastructure Sunday, causing widespread outages across Ukraine as Kyiv’s forces pressed a swift counteroffensive that has driven Moscow’s troops from swaths of territory it had occupied in the northeast.

The bombardment ignited a massive fire at a power station on Kharkiv’s western outskirts and killed at least one person. President Volodymyr Zelenskyy denounced the “deliberate and cynical missile strikes” against civilian targets as acts of terrorism.

Ukraine’s second-largest city of Kharkiv appeared to be without power Sunday night. Cars drove through darkened streets, and the few pedestrians used flashlights or mobile phones to light their way.

Separately, the Zaporizhzhia Nuclear Power Plant in the Russia-occupied south completely shut down in a bid to prevent a radiation disaster as fighting raged nearby.

Kyiv’s action in recent days to reclaim Russia-occupied areas in the Kharkiv region forced Moscow to withdraw its troops to prevent them from being surrounded, leaving behind significant numbers of weapons and munitions in a hasty flight as the war marked its 200th day on Sunday.

Ukraine’s military chief, Gen. Valerii Zaluzhnyy, said its forces had recaptured about 3,000 square kilometers since the counteroffensive began in early September. He said Ukrainian troops are only 50 kilometers from the Russian border.

One battalion shared a video of Ukrainian forces in front of a municipal building in Hoptivka, a village just over a mile from the border and about 19 kilometers north of Kharkiv.

In Sunday night’s missile attacks by Russia, the Kharkiv and Donetsk regions seemed to bear the brunt. Dnipropetrovsk, Zaporizhzhia and Sumy had only partially lost power, Zelenskyy said.

Kharkiv Mayor Igor Terekhov called the power outage “revenge by the Russian aggressor for the successes of our army at the front, in particular, in the Kharkiv region.”

“Russian terrorists remain terrorists and attack critical infrastructure. No military facilities, only the goal of leaving people without light and heat,” he tweeted,

But Zelenskyy remained defiant despite the attacks. Addressing Russia, he added: “Do you still think you can intimidate, break us, force us to make concessions? ... Cold, hunger, darkness and thirst for us are not as scary and deadly as your `friendship and brotherhood.’ But history will put everything in place. And we will be with gas, lights, water and food … and WITHOUT you!”

Later in the evening some power had been restored in some regions. None of the outages were believed to be related to the shutdown of the reactors at the Zaporizhzhia plant.

While most attention focused on the counteroffensive, Ukraine’s nuclear energy operator said the Zaporizhzhia nuclear power plant, Europe’s largest, was reconnected to Ukraine’s electricity grid, allowing engineers to shut down its last operational reactor to safeguard it amid the fighting.

The plant, one of the 10 biggest atomic power stations in the world, has been occupied by Russian forces since the early days of the war. Ukraine and Russia have traded blame for shelling around it.

Since a Sept. 5 fire caused by shelling knocked the plant off transmission lines, the reactor was powering crucial safety equipment in so-called “island mode”--an unreliable regime that left the plant increasingly vulnerable to a potential nuclear accident.

The International Atomic Energy Agency, the U.N. nuclear watchdog that has two experts at the site, welcomed the restoration of external power. But IAEA Director-General Rafael Grossi said he is “gravely concerned about the situation at the plant, which remains in danger as long as any shelling continues.”

He said talks have begun on establishing a safety and security zone around it.

In a call Sunday with Russian President Vladimir Putin, French President Emmanuel Macron urged the withdrawal of Russian troops and weaponry from the plant in line with IAEA recommendations.

The pullback of Moscow’s forces in recent days marked the biggest battlefield success for Ukrainian forces since they thwarted a Russian attempt to seize Kyiv near the start of the war. The Kharkiv campaign seemed to take Moscow by surprise; it had relocated many of its troops from the region to the south in expectation of a counteroffensive there.

Yuriy Kochevenko, of the 95th brigade of the Armed Forces of Ukraine, tweeted a video from what appeared to be central Izyum. The city was considered an important command and supply hub for Russia’s northern front.

“Everything around is destroyed, but we will restore everything. Izyum was, is, and will be Ukraine,” Kochevenko said in his video, showing the empty central square and destroyed buildings.

Meanwhile, the Ukrainian General Staff said Russian troops also had left several settlements in the Kherson region, in the southern part of the country, as Kyiv’s forces pressed the counteroffensive. It did not identify the areas.

But an official with the Russian-backed administration in the city of Kherson, Kirill Stremousov, said on social media that the city north of the Crimean Peninsula was safe and asked everyone to stay calm.

The Russian Defense Ministry said Saturday the withdrawal from Izyum and other areas was intended to strengthen Moscow’s forces in the neighboring Donetsk region to the south. The explanation was similar to how Russia justified pulling back from Kyiv earlier this year.

But Igor Strelkov, who led Russia-backed forces when the separatist conflict in the Donbas erupted in 2014, mocked the Russian Defense Ministry’s explanation of the retreat, suggesting that handing over Russia’s own territory near the border was a “contribution to a Ukrainian settlement.”

The retreat angered Russian military bloggers and nationalist commentators, who bemoaned it as a major defeat and urged the Kremlin to step up its war efforts. Many criticized Russian authorities for continuing with fireworks and other lavish festivities in Moscow that marked a city holiday on Saturday despite the debacle in Ukraine.

In Moscow, Putin attended the opening of a huge Ferris wheel in a park on Saturday and inaugurated a new transport link and a sports arena. The action underscored the Kremlin’s narrative that the war it calls a “special military operation” was going according to plan without affecting Russians’ everyday lives.

“The fireworks in Moscow on a tragic day of Russia’s military defeat will have extremely serious political consequences,” Markov wrote on his messaging app channel. “Authorities mustn’t celebrate when people are mourning.”

In a sign of a potential rift in the Russian leadership, Ramzan Kadyrov, the Kremlin-backed head of Chechnya, said the retreat resulted from blunders by the Russian brass.

“They have made mistakes and I think they will draw the necessary conclusions,” Kadyrov said. “If they don’t make changes in the strategy of conducting the special military operation in the next day or two, I will be forced to contact the leadership of the Defense Ministry and the leadership of the country to explain the real situation on the ground.”

U.S. Secretary of State Antony Blinken and the head of NATO cautioned Friday the war would likely go on for months, urging the West to keep supporting Ukraine through what could be a difficult winter.

Ukraine’s battlefield gains would help as the Biden administration seeks continued financial support of the war effort from Congress and Western allies, said Daniel Fried, a former U.S. ambassador to Poland and now a distinguished fellow at the Atlantic Council in Washington.

“The Biden administration policy is evolving in a direction that is more and more justified,” Fried said.