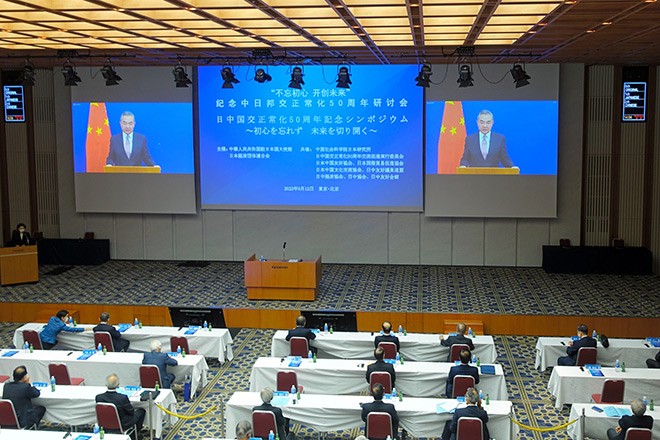 A symposium to commemorate the 50th anniversary of the normalization of diplomatic relations between Japan and China is held in Tokyo on Sept. 12. (Yusaku Yamane)

The Chinese ambassador called on Japan for caution in dealings with Taiwan at a symposium in Tokyo on Sept. 12 to commemorate the 50th anniversary of normalization of ties between Japan and China.

“We hope (the Japanese government) is cautious in its words and actions with regard to the Taiwan issue, not sending a wrong signal to people supporting Taiwan's independence, as well as not participating in any provocative moves that use Taiwan to keep China in check,” said Kong Xuanyou, the Chinese ambassador to Japan.

Looking back on the past 50 years, Kong praised progress made in relations between Japan and China.

“Interaction and cooperation between us in various fields made a great leap forward in their quantity and quality and achieved unprecedented width, depth and height,” he said.

On the current state of relations between Japan and China, however, Kong pointed out, “Complex and sensitive aspects still exist, and we are entering a period in which many new contradictions occur.”

“For the stable development of relations between the two countries, China and Japan must adhere to the four political documents (that the two countries have signed) and promises that were made so far,” he said. “Important principal issues concerning the basis of China-Japan relations, such as history or Taiwan, must neither be left vague, nor become unstable, nor go backward.”

“Progress in Japan-China relations were brought about by unrelenting efforts by the public in both countries,” Hayashi said. “We regard it as our responsibility for our descendants, as well as our duty inherited from our ancestors, to build constructive and stable Japan-China relations through wisdom and experience (of the publics) and a conscious effort by both countries.”

The Chinese Embassy in Japan and Keidanren (Japan Business Federation) organized the event.

The event included an online panel discussion connecting the venue in Tokyo and the Chinese Academy of Social Sciences in China.

In the panel discussion, experts from the two countries discussed topics concerning the 50th anniversary of normalization of relations between Japan and China, which occurred in 1972.