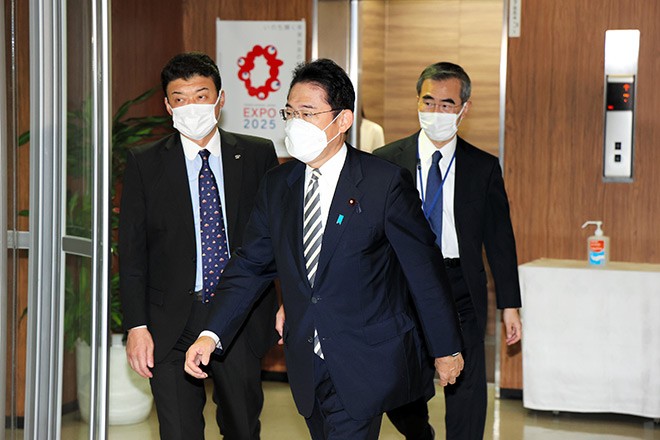 Prime Minister Fumio Kishida heads to a meeting of executives of the ruling Liberal Democratic Party at its Tokyo headquarters on Sept. 13. (Koichi Ueda)

While Prime Minister Fumio Kishida prides himself on his ability to listen, his gift of gab failed him when he sought to placate concerns about ties between lawmakers of his Liberal Democratic Party and the Unification Church.

Kishida attended the Sept. 8 session of Diet committees to also explain why public funds would be used to hold a state funeral for former Prime Minister Shinzo Abe.

But those attempts to clear up doubts appear to have backfired, according to the latest public opinion poll by The Asahi Shimbun conducted on Sept. 10 and 11.

The findings for the first time showed the Kishida Cabinet with a higher disapproval rating than approval rating, 47 percent to 41 percent.

Kishida was asked in the Diet committee meetings if he would conduct further investigations into the ties between Abe and the Unification Church, now formally known as the Family Federation for World Peace and Unification.

Kishida replied there would be limitations to what could be done now that Abe was dead.

The former prime minister was assassinated on July 8 by an assailant who held a grudge against the church and believed Abe had ties to it.

The LDP on Sept. 8 released the results of the reports submitted by lawmakers about their ties to the Unification Church with close to half of lawmakers having some connection.

As a result, the Asahi poll showed that the ratio of respondents who felt LDP lawmakers would be unable to cut ties to the Unification Church rose to 81 percent from the 76 percent in the August poll.

Government officials were admitting there was little they could do to turn around public opinion.

One high-ranking official in the prime minister’s office said, “The state funeral is linked with the Unification Church issue so there is nothing more the government can do.”

An executive with Komeito, the junior coalition partner, said, “There are absolutely no factors that could contribute to increasing the approval rating. All the things (Prime Minister Kishida) thought might help have backfired.”

An LDP executive said, “It will become serious if the rating continues to fall, so we will have to find some way to turn it around.”

Coalition officials were also saying the Kishida administration was not adequately sharing information about what it planned to do.

One Komeito executive said the party learned about measures to deal with surging consumer prices only just before they were approved by the Kishida Cabinet on Sept. 9.

On the same day, Kishida met with LDP Vice President Taro Aso. While the contents of that discussion were not divulged, an Aso associate also said mention was made about the need to sufficiently inform those who continue to support Kishida before major policy decisions are made.

Despite such disgruntlement, the possibility of that support evaporating remains slim at the moment.

Kishida decided to hold the state funeral for Abe because of the strong calls for such a state memorial service from within the LDP. The party also holds responsibility for the large number of lawmakers with ties to the Unification Church.

And the LDP faction that was led by Abe remains rudderless so there is no obvious movement within the party to seek a replacement for Kishida.

Like the Kishida administration, the LDP also has few options to help turn around the Cabinet’s approval rating.

One LDP lawmaker said, “We will have to bear with the situation while trying to explain what is happening.”

(This article was written by Keishi Nishimura and Ayako Nakada.)