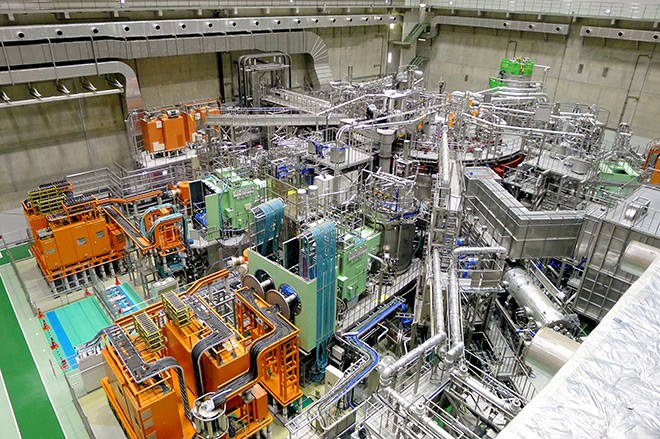 The government plans to compile a strategy by around next spring on researching and developing nuclear fusion power generation, which could help it achieve its decarbonization goals.

The move comes as countries across the globe race to develop their own technologies to use nuclear fusion, a process that does not emit any carbon dioxide (CO2).

“We are no longer in the era of cooperation but the era of competition,” Sanae Takaichi, minister in charge of science and technology, said at a news conference on Sept. 13. “We will further discuss the matter to draft a strategy while following the moves by other countries, including overseas private-sector firms.”

Japan has accumulated nuclear fusion technologies since it joined the ITER, an international joint project to construct a fusion reactor.

Prime Minister Fumio Kishida sees having a clean energy strategy as an important part of his flagship policy platform, which he calls “new capitalism.”

At a meeting of the government’s expert panel on clean energy last month, Kishida instructed the participants to start discussions on the development of next-generation reactors, including fusion reactors.

The government aims to put a fusion reactor into practical use around the middle of this century. To achieve that, the government’s new strategy would include support measures for small and mid-size companies and venture firms, as well as ways to attract private-sector investment.

Unlike current nuclear power generation, which produces electricity by splitting atoms, nuclear fusion combines atoms, a process that releases a tremendous amount of thermal energy. It is the same energy source that powers the sun.

Deuterium and other fuels for nuclear fusion power generation are less likely to become scarce, even if international tensions ratchet up, because the fuels are abundant in the sea.

Nuclear fusion power generation does not emit CO2 as it does not need to burn fossil fuels. It also does not produce radioactive waste that takes a long time to decay, as nuclear fission does.

Thirty-five countries, including Japan, the United States and European nations, are currently participating in the ITER project and building a fusion reactor in France.

The reactor was initially scheduled to go online in 2018, but the plan has been repeatedly put off due to a lack of funding. The assembly of the reactor core began in 2020, and project members are now hoping to start operations in 2025.

But member nations are now engaging in their own research and development. That is because they no longer need to focus on addressing the technological issues arising from the joint project following progress on the construction of the reactor.

The U.S. government announced in March that it would draft a strategy to develop a fusion reactor over the next decade. It is also expanding investment in new private-sector venture businesses.

Britain has already compiled its own strategy on nuclear fusion and is aiming to build a fusion energy plant in the 2040s.

China also intends to construct a test reactor on a similar scale as the one being built under the ITER project with the goal of turning the test reactor into an operational one by the 2030s.

In Japan, some firms are supplying key parts for the ITER project, while Kyoto Fusioneering Ltd., a Kyoto University startup, joined the British program to develop a fusion energy plant as a member in charge of its conceptual design.

But Japanese private-sector firms are mostly slow in developing nuclear fusion technologies since they cannot expect domestic projects as big as the ITER at this point.