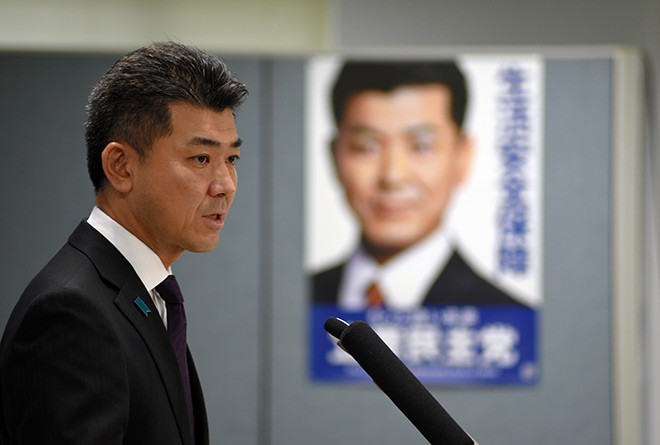 Kenta Izumi, head of the main opposition Constitutional Democratic Party of Japan, explains at a Sept. 15 news conference that he and other party executives will not attend the state funeral for former Prime Minister Shinzo Abe. (Tamiyuki Kihara)

Executives of the main opposition Constitutional Democratic Party of Japan decided to skip the state funeral for former Prime Minister Shinzo Abe after receiving no explanation on why tax money is covering the event.

Party leader Kenta Izumi on Sept. 8 asked Prime Minister Fumio Kishida at a Diet committee session for the legal basis of holding the Sept. 27 state funeral. But no satisfactory answer was received.

So the CDP submitted a written question on why the Kishida Cabinet was not hosting Abe’s funeral.

CDP officials said a response was received on Sept. 14.

“It was simply a rehash of what has been said in the Diet until now,” Izumi told reporters on Sept. 15. “It was extremely insincere.”

He added that all nine CDP executives would not attend the state funeral, but individual party lawmakers can decide for themselves whether they will attend.

Opposition parties have been split over the state funeral for the slain former prime minister.

Members of Nippon Ishin (Japan Innovation Party) and the Democratic Party for the People will attend. However, those from the Japanese Communist Party, Reiwa Shinsengumi and the Social Democratic Party will not.

Tomoko Yoshino, who chairs Rengo (Japanese Trade Union Confederation), plans to attend Abe’s funeral as the labor representative, but she has also made clear she is not satisfied with the government’s explanation for holding the state funeral.

Some member unions of Rengo, the main supporter of the CDP, have expressed opposition to the state funeral.

The government mailed out invitations to the funeral. Some recipients were puzzled over why they were on the invitation list.

Stage director Amon Miyamoto posted a tweet on Sept. 13 explaining that he had received an invitation. “Why me?” he asked.

He said he thought it had to be a mistake because he had openly opposed Abe’s move when he was prime minister to raise the retirement age for top prosecutors.

Miyamoto added that he would not attend because he was opposed to the holding of a state funeral.

Another puzzled recipient of an invitation was Kensuke Miyazaki, a former LDP lawmaker who resigned in February 2016 over an extramarital affair that came to light after he announced he would apply for paternity leave.

He said he was surprised that an invitation was sent to someone who had served such a short time in the Diet. He plans to attend.

Veteran journalist Soichiro Tawara also received an invitation, but he said he would not attend because he feels that any decision on the state funeral should be made only after debate in the Diet.