The world of drunken ‘salarymen’ enters the picture 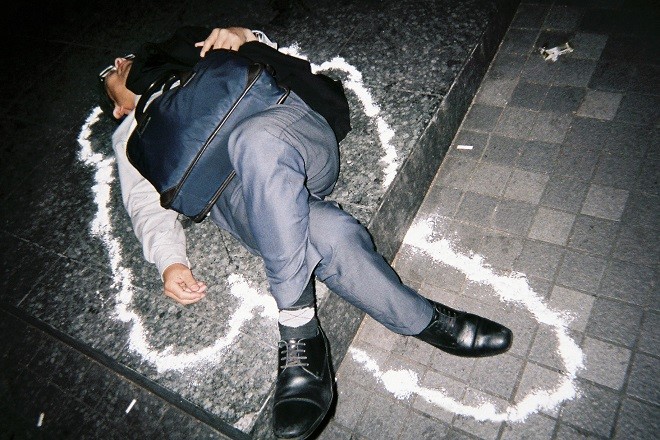 An image from Allegra Pacheco’s series of photos showing “salarymen” sleeping on streets after getting drunk with colleagues. She circles each individual with white chalk. (Provided by Allegra Pacheco)

The sight of drunken suited “salarymen” passed out on trains and city streets following a night of heavy drinking with co-workers can come as a jolt to any first-time visitor expecting a more conservative aspect to the well-oiled loyal corporate culture for which Japan is famous.

Pacheco recalled being stunned at coming across such scenes in Tokyo’s Shibuya, Shinbashi and Ikebukuro entertainment districts and the fact that passers-by paid them no heed.

Determined to gain a better understanding of the phenomenon, she consulted a Japanese friend who told her that sleeping outdoors “is a typical style for salarymen.”

Inspired by the imagery that seemed so out of place with Japan’s reputation for notoriously long work hours and group mentality so as not to stand out, Pacheco, 36, created a documentary film on the theme simply titled “Salaryman.”

Before arriving in Japan eight years ago, Pacheco had never heard the word “salaryman.” To her mind, the description was way too passive for the legions of workers who toil away at corporations for what until recent years was guaranteed lifetime employment.

Pacheco quickly discovered that salarymen exist in every corner of the nation’s towns and cities, all of them invariably attired in the same dark suits, shirt and tie, leaving for their offices around the same time each day and taking to the streets at night to drink and unwind with colleagues and higher-ups.

To her, they resembled “an army of men in suits.” Pondering why salarymen drink themselves senseless, Pacheco assumed it is the only way they can unwind and let off steam due to grueling work hours.

Pacheco started photographing individuals she found sleeping on streets, circling them with a piece of white chalk each time she came across one.

She later hit upon the idea of making a documentary based on interviews with salarymen to rethink the meaning of work.

Pacheco spoke to those in suits in town, pubs and trains. She also relied on a dating app. Unlike the serious attitudes they displayed during the day, tipsy salarymen talked much more freely in front of a camera.

They jokingly referred to themselves as “employers’ slaves.” One salaryman lamented, “I sacrifice one thing to protect another,” while another said, “I do not know which is my true self: when I am at home or when I am in my office.”

Those she interviewed littered their sentences with well-worn words and phrases such as “patience” and “it can’t be helped.”

Prior to coming to Japan, Pacheco led a work-centered life of her own. For that reason, she felt a strong bond with Japan’s salarymen.

Pacheco moved from Costa Rica to New York City with the dream of making it as a professional photographer. But the only job she could find in the Big Apple was retouching images for publication in magazines.

Her days were filled with working in a dark room touching up photos. The days flew by, but Pacheco was happy to be working in a place she loved.

Eventually, though, her visa was not renewed and she had to quit her job and rental accommodation. A friend working in Japan advised the despondent Pacheco to give Japan a shot.

That was her introduction to the world of the drunken salaryman.

She spent five years interviewing salarymen and decided to make a film on the subject as a way to take stock of her own life. Pacheco was keen not to depict Japan as an inscrutable society from the standpoint of an outsider.

The 100 or so people she interviewed included a sociologist, an economist and a labor union insider.

Pacheco also met with a former co-worker and the mother of Matsuri Takahashi, a rookie employee at advertising giant Dentsu Inc. who committed suicide in 2015 at age 24, unable to cope with the grueling work hours expected of her.

For most of the postwar period, Japan’s workforce was guaranteed lifetime employment in return for working long hours and remaining loyal to their companies.

“I had no time to spend with my family,” said a man now living a comfy life in retirement as he reflected on the decades in which he sacrificed everything for the good of his company.

“The economy got better every year, always surpassing the previous year,” he said with pride.

Younger generations question the merits of such a work-centric lifestyle.

A female company employee with a small child complained that her “husband rarely stays at home owing to his busy schedule.”

“It is wrong to devote one’s entire life to working,” she said.

One man started looking back on his life after he quit his job due to depression stemming from his exhaustion from working long hours.

Pacheco finished filming and started the editing process in New York City. As the novel coronavirus pandemic showed no signs of ebbing, she did extra online interviews to complete “Salaryman” last year.

The film has been shown at more than 20 movie festivals in Los Angeles and elsewhere.

Pacheco is currently seeking a chance to screen her creation in Japan in the hope of exchanging opinions with those whose working environment has undergone a sea change due to the COVID-19 outbreak.