EDITORIAL: Diet session in fall crucial for Kishida to win back public trust 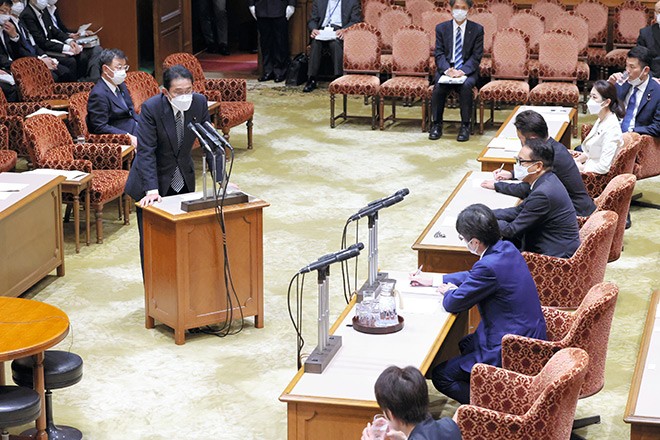 Nearly a month has passed since opposition parties called on the Cabinet to convene an extraordinary Diet session according to a constitutional provision.

Prime Minister Fumio Kishida, speaking in a Sept. 15 meeting of the ruling Liberal Democratic Party faction he heads, said “an extraordinary Diet session is expected to be held next month.”

The government and the ruling coalition is reportedly considering Oct. 3 as the potential date for opening the session. But the Kishida administration has been far too slow in responding to calls for Diet debate on important policy issues.

It is also surprising to hear how Kishida talked about the matter as if it were someone else’s business.

Article 53 of the Constitution stipulates the Cabinet must determine to convoke an extraordinary Diet session “when a quarter or more of the total members of either house makes the demand.”

Kishida’s casual remarks signal his lack of awareness of the fact that he is responsible for responding to the weighty demand based on the Constitution.

Since the July 10 Upper House election, a slew of issues has come to the fore that are eroding public trust in politics.

In addition to the seventh wave of novel coronavirus cases and surging prices, controversy has erupted over the government’s plan to hold a state funeral for former Prime Minister Shinzo Abe, which has bitterly divided public opinion.

Revelations have also surfaced about the relationship between politicians and the Unification Church, now formally known as the Family Federation for World Peace and Unification.

The Kishida administration should have responded to these issues by agreeing to exhaustive debate on the Diet floor even without any demand from the opposition camp.

It did convene an extraordinary session in August following the Upper House election but closed it after three days. It has since ignored the opposition call for a full-fledged Diet session.

The Kishida administration’s reluctance to fulfill its responsibility to explain its policy decisions and actions and the short shrift it is giving to the people must have caused his Cabinet’s approval ratings to sink.

As for his decision to hold a state funeral for the slain former prime minister, Kishida last week attended special meetings held by the two chambers’ committees to answer questions, although the Diet is not currently in session.

But his remarks at these sessions were mostly a rehash of past statements that did not offer a straightforward response to many questions and doubts surrounding the decision.

But he has failed to deliver on this promise. He has not held a Diet session or a news conference to answer related questions.

As things now stand, the state funeral will be held at Tokyo’s Nippon Budokan hall on Sept. 27 as scheduled while many Japanese remain uncomfortable and unconvinced. Is Kishida happy about the situation?

As for relations with the Unification Church, the ruling party last week published the findings of a survey of its members, which was basically based on reports from the members themselves.

But a cascade of new revelations about LDP lawmakers’ connections with the church and its affiliated organizations have since emerged, further undermining the credibility of the LDP’s “review” into the problem.

Members of other parties in both the ruling and opposition camps have also been found to have had ties with the church and its affiliates, although their links are not as broad or deep as those of the LDP.

These include Komeito, the LDP's junior partner in the ruling coalition, the Constitutional Democratic Party of Japan, Nippon Ishin (Japan Innovation Party) and the Democratic Party for the People.

To reflect on the past to learn lessons for the future, the Diet as a whole needs to tackle the task of unveiling the related facts.

Much of the onus of this work, of course, should be put on the LDP and the Kishida administration.

In particular, the ruling camp needs to clarify the roles performed by Abe, who is said to have controlled how the votes of Unification Church followers were distributed among the party’s candidates during election campaigns, and how the church was allowed by the government to change its name while Abe was in power.

The upcoming extraordinary Diet session will be a crucial test for the legislature’s determination to dispel the people’s doubts and win back their trust in politics.