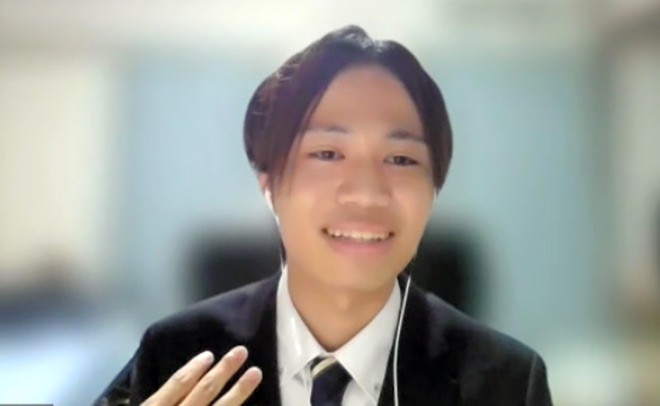 Keita Takasu, a third-year student at Gifu University, talks about a university life during the pandemic at an online news conference to publish findings of the survey by the National Federation of University Co-operative Associations (NFUCA).

Third-year students are feeling their lives are least fulfilling among all university students, according to a survey that cited the COVID-19 pandemic.

The National Federation of University Co-operative Associations (NFUCA) said third-year students felt deprived of opportunities to bond with classmates as classes began to be held online immediately after their enrollments as a precaution against the novel coronavirus.

The survey, the third to be held since the global health scare erupted in early 2020, was conducted online in July. It garnered replies from 5,225 students.

The government declared its first COVID-19 state of emergency in April 2020, just as the students now in their third year entered university.

As a result, many universities canceled entrance ceremonies, moved lectures online and restricted access to their campuses. Extra curricular activities, such as clubs and societies, which many university students in Japan join, were limited for prolonged periods.

The figure was 41.7 percent among students in their fourth, fifth or sixth year.

One-third, or 33.6 percent, of third-year students said they never joined extra curricular clubs or societies and have no intention of doing so.

The percentage of respondents who said they had made no friends since entering university was highest among third-year students at 4.8 percent.

The figure was under 3 percent among students in other years.

Similarly, 22.1 percent of third-year students replied that they had made fewer than five new friends since entering university.

Only between 15.7 and 18.3 percent of students in other years gave the same answer.

In a survey by the education ministry in March, 99 percent of universities said they planned to resume holding face-to-face classes, mirroring an easing of precautions among universities across the nation.

The NFUCA survey gave students an opportunity to frankly reveal matters that bothered them.

Another third-year student deplored the fact “I have been given responsibility to manage an extra curricular club, but I have as little knowledge or experience as a first-year student (due to the pandemic).”

The student added that “inexperience makes me look unenthusiastic about the club and other members criticize me for it. It’s hard.”

At a news conference to announce the survey findings, Keita Takasu, a third-year student at Gifu University who attended the event online, expressed surprise that students who are his junior in an extra curricular club had made many friends.

He attended a face-to-face class at the university for the first time only two months after his enrollment.

“It was difficult to connect with other students in classes or through an extra curriculum club because of various restrictions,” he said.

He said it was only after becoming a third-year student that he felt able to make friends with his classmates.