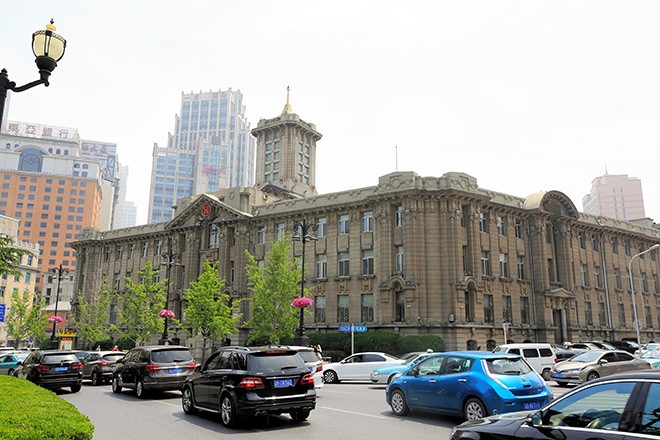 The former city hall of Dalian, China, which was built in 1919 during Japan’s colonial rule, now houses a bank. The photo was taken in 2018. (Asahi Shimbun file photo)

Photographer Osamu Funao, 62, lives in a mountainous area on the Kunisaki Peninsula in Kyushu. He moved there from Tokyo more than two decades ago.

While growing insecticide-free rice, Funao has published photo collections featuring the daily lives of people in Africa and Asia.

He is now asking for donations for his next project: a photo collection of buildings in northeastern China from the days of Manchukuo, a puppet state that Japan established in 1932.

Funao has traveled to the region many times and taken pictures of around 400 architectural legacies.

“If I had lived in the era, I would have gone to Manchuria, feeling as if my world would expand all at once,” Funao said.

He visited some cities in the region, such as Shenyang and Dalian, for the first time six years ago.

Red-brick buildings from the days of Manchukuo figured prominently among the glittering skyscrapers.

The structures gave Funao a sense of Japan’s rising power in the first half of the 20th century, but he also wondered how people of an invaded country looked at these buildings.

What was Manchukuo after all? A hazy feeling led him to start photographing these buildings.

More than 1 million Japanese are estimated to have lived in Manchukuo. Everything was lost when Japan was defeated, and many people were killed.

War inflicts merciless suffering on the weakest. The buildings that remain in China may be silent witnesses to all those historical events.

Sept. 18 marks the anniversary of the Manchurian incident, when the Japanese military claimed Chinese troops had bombed a railway outside the city of Mukden, now Shenyang, and started military action in northeastern China known as Manchuria.

It was a crucial event on Japan’s path toward World War II.

Every Chinese knows this special day, just as Japanese know the day when the war ended and the days when atomic bombs were dropped on Hiroshima and Nagasaki.

We also should not forget Sept. 18.