Assemblyman willing to lose LDP backing in favor of church 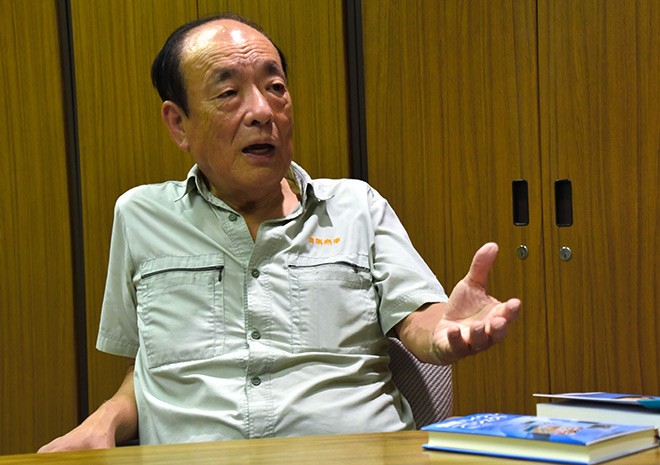 Hideo Mima, a Tokushima city assembly member of the Liberal Democratic Party, speaks about his ties to the Unification Church on Sept. 13. (Shunsuke Abe)

A veteran Tokushima city assembly member of the ruling Liberal Democratic Party confirmed he remains a follower of the Unification Church and has worked politically to fulfill the group’s “wishes.”

Hideo Mima, 73, told The Asahi Shimbun that he has no plans to sever his ties with the church despite instructions to do so from the top echelons of the LDP.

He is currently serving his sixth term in the city assembly and said he still donates money to the church.

Mima’s long relationship with the Unification Church was no secret. His mother’s concerns about his donations to the organization were addressed at a Diet committee in the 1970s.

Mima explained how he ended up joining the Unification Church.

After graduating from a university in Tokyo, he was working at trading company in Osaka when he saw a flier on a subway about a “citizens’ college course.”

He attended the course.

“I was moved by the idea that we should change the world not only by politics and economics but also through religious thought,” Mima said.

He later learned that the organizer of the course was the Unification Church, and he became a member in 1974.

He initially lived with other followers at a facility that church members called “home.”

Although encouraged to bring in new followers, Mina said he “was not good at” recruiting people.

“My mission was to win a legislative seat and fulfill the church’s wishes, such as creating world peace and treating all human beings as one family,” Mima said.

He said he has also worked to “realize policies based on traditional family values.”

Mima’s mother was worried about her son and lobbied a Diet member to “rescue” Mima from the church.

A Lower House legal affairs committee discussed the issue in 1977. His mother said at a committee meeting that she had taken her son back from the church and found him work at a cement sales company that her family was running.

But she discovered that Mima was giving his salary and bonuses to the church. He also told her that he would marry a person picked out by the Unification Church.

“He is just a shell of himself,” the mother said at the meeting.

Mima said about his mother’s statement: “It wasn’t like I donated all of my pay. My mother just got paranoid.”

Mima won his first city assembly seat as an independent candidate in 1995. He repeatedly held study group meetings on such policies as national defense and constitutional revision.

Those issues gained the attention of the LDP, which has officially endorsed him since 2015.

In the last two elections, he ran and won as an LDP candidate.

“The church itself does not have the power to pass bills,” Mima said. “The church hasn’t given me specific suggestions, but I thought I should do what I could under the LDP umbrella.”

One project he has pushed is the “Japan-South Korea undersea tunnel” project that was based on the wishes of Sun Myung Moon, the founder of the Unification Church.

Mima in 2010 established a group to promote the tunnel project, headed by a now-deceased LDP Tokushima prefectural assembly member. Mima served as a vice chairman.

In 2011, an opinion letter seeking fast-track construction of the tunnel was submitted to the Tokushima prefectural assembly.

Although it was approved by the assembly, the tunnel project has long been stalled.

Concerns about the donation-collection methods of the Unification Church resurfaced after former Prime Minister Shinzo Abe was shot and killed in July by a gunman with an apparent grudge against the church.

LDP Secretary-General Toshimitsu Motegi said at a news conference on Sept. 8 that party members should cut all ties to the church.

Mima said he will not hide the fact that he is a follower of the church. He also said he would not mind if the LDP withholds its endorsement of him in the next assembly election scheduled for spring 2023.

He said it is “regrettable” that the church has created victims through its so-called spiritual sales.

“I will run for re-election even if the party won’t back me,” he said. “I want to win and help these victims.”

The LDP’s Tokushima prefectural chapter decides whether or not to endorse city assembly candidates.

Multiple prefectural assembly members said they “knew” about Mima’s ties to the church.

But Yoshiyuki Shigekiyo, secretary-general of the prefectural chapter, told The Asahi Shimbun, “I didn’t know until the (shooting of Abe).”

He said he does not know how the party will handle the situation, noting that decisions on endorsements are basically “personality-oriented.”

“It’s not that (Mima) himself did something wrong,” Shigekiyo said. “I can’t do anything but to wait for instructions from the party headquarters regarding what to do in the future.”