Tired or stressed out, many people turning to guilty pleasure foods 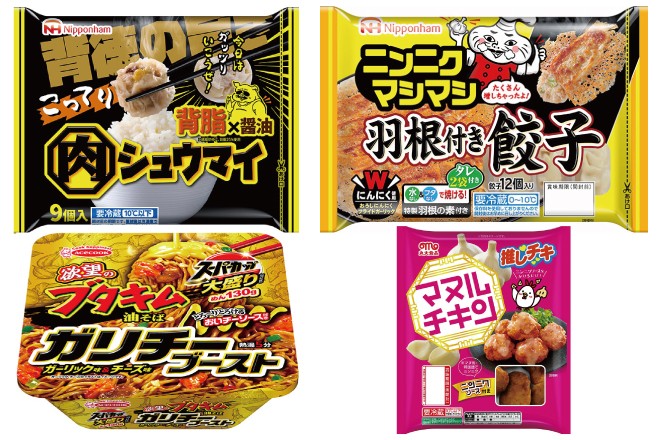 The drawn-out novel coronavirus pandemic is changing Japanese appetites as people turn to high-calorie and fat-rich foods to relieve stress from self-isolation and enrich the time they spend at home.

Food companies are offering new products to cater to a growing demand for so-called “cheat meals” or “guilty pleasure foods,” which are unhealthy but irresistible.

Prepared with unexpected combinations of ingredients and served in oversize portions, those dishes have also won support from restaurant diners because they look Instagrammable.

Each 26-gram piece is larger than regular steamed dumplings, making it more filling and satisfying, the company said.

Richly flavored with garlic, the product is mainly targeted to men in their 40s through 60s.

“An increasing number of people want to indulge themselves with guilty pleasure foods at least once a week for a change because of the prolonged stay-at-home life,” an NH Foods representative said. “It completely goes against the health-conscious trend, but we think the two will coexist with each other in our lifestyles.”

Mask-wearing lifestyles have taken hold amid the pandemic, and there have been fewer opportunities for people to talk with others outside their homes.

Now that many don’t need to worry about bad breath, dishes prepared with an abundance of garlic and other aromatic vegetables are in the spotlight, the company said.

The product has been selling 20 percent better than expected, the company said.

It is the latest addition to the “Tsumibukai” bread series introduced in April, under which the company has offered a toast topped with whipped sugar butter and a French toast stuffed with whipped cream.

A survey conducted in June by marketing firm Cross Marketing Inc., which covered 1,100 men and women aged between 20 and 69, found many want to gorge on guilty pleasure foods when they feel down, such as when stressed out (31.6 percent) and exhausted (25.8 percent).

The survey also showed people reward themselves with cheat meals when something good has occurred (17.5 percent) and when they get a big job done or finish an exam (12 percent).

Still, 42.9 percent, the largest group, cited “Do nothing in particular,” including more than 50 percent of male respondents.