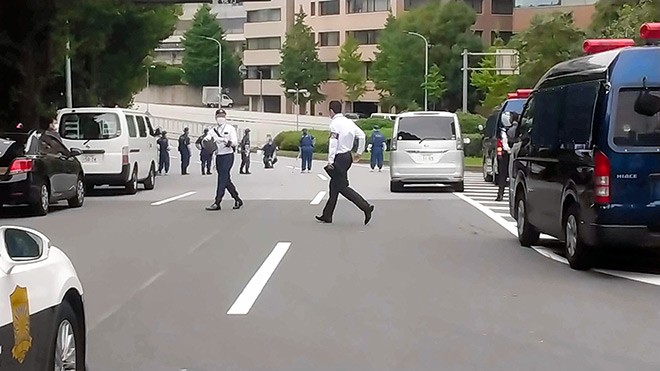 Police officers check the scene in Tokyo’s Chiyoda Ward where a man set himself on fire on Sept. 21 to protest the state funeral of former Prime Minister Shinzo Abe. (Emi Iwata)

A man believed to be in his 70s set himself on fire in Tokyo on Sept. 21 to protest the planned state funeral for former Prime Minister Shinzo Abe, police said.

He suffered burns over his entire body but remains conscious and in stable condition at a hospital, they said.

According to the Metropolitan Police Department, a pedestrian reported a “man in flames” on a street near the prime minister’s office in Tokyo’s Chiyoda Ward around 6:50 a.m. on Sept. 21.

The Tokyo Fire Department said a police officer who was trying to extinguish the fire suffered a burn on the right arm.

At the scene, police found a handwritten letter that said, “As an individual, I vehemently oppose the state funeral.”

According to the Kojimachi Police Station and other sources, the man told investigators, “I poured fuel all over me and set myself on fire.”

The planned state funeral for Sept. 27 at Nippon Budokan Hall in Tokyo has come under increasing public criticism.

Those opposed say that Abe is undeserving of such a taxpayer-funded ceremony, citing the many scandals that plagued his administration and his security policies that divided the nation.