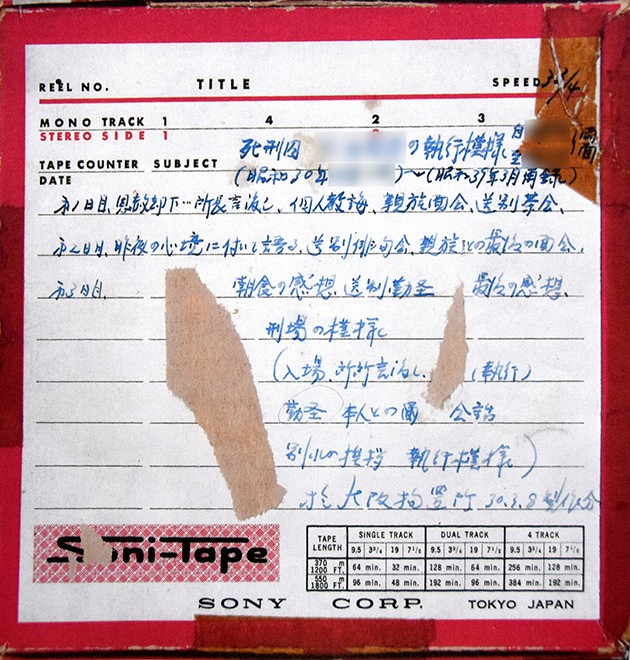 OSAKA--A rare audio recording of an exchange between a death row inmate, his sister and prison staff two days before the man was hanged will be presented as evidence in a lawsuit filed by two condemned prisoners contesting the constitutionality of informing convicts of their executions just hours before they take place.

The reel-to-reel recording at the Osaka Detention House in 1955 was made at the behest of Sakuro Tamai, the prison warden.

The inmate was handed the death sentence for fatally shooting a police officer during the course of a robbery.

He was informed of the time of his execution two days beforehand. The recording lasts around 100 minutes.

A member of staff is heard telling the inmate to make sure he gets everything off his chest.

The sister visited over two days and told her brother how his family was holding up. The inmate chats about his childhood and his thoughts for his aged mother.

He ends the conversation by thanking his sister for all that she had done.

“Please give my best regards to Mom. I hope you will look after the children and my wife,” the inmate said.

The sister begins sobbing, so the inmate tells her, “Stop crying, Sis. Let us laugh and part ways.”

A prison staff tells the sister, “This will be the last time you see him so hold his hands tightly.”

At the start of the recording, Tamai is heard informing the inmate that the execution would take place in two days.

The prison chaplain is heard speaking with the inmate. The recording also captures the sounds of small ceremonies held with other death row inmates, including the reading of last haiku by those who had joined a haiku club in the detention house.

On the day of the execution, staff and Tamai ask the inmate if he has any last words. He expresses remorse for his crime.

The recording also captures the sound of the trapdoor springing open while a Buddhist priest chants a sutra.

The recording ends with a doctor pronouncing the inmate dead 14 minutes and 2 seconds later.

The recording was kept by Tamai’s granddaughter and passed on to the lawyers of the two death row inmates who filed the civil lawsuit in November.

On Dec. 21, 2021, then Justice Minister Yoshihisa Furukawa held a news conference after three death row inmates were hanged that morning.

He was asked about the timing of informing inmates when they would be hanged.

“We inform the inmates on the day of the execution,” Furukawa said. “We are concerned that any earlier notification could lead to significant psychological damage to the individual.”

There are no legal provisions for when inmates should be informed of their executions. In past Diet questioning, officials have said the notification is usually made an hour or two prior to the event.

The lawsuit submitted in November claimed the practice violates Article 31 of the Constitution which states that no “criminal penalty be imposed, except according to procedure established by law.”

The plaintiffs argue that the lack of time to prepare before an execution is carried out deprives them of the opportunity to call their lawyers to file a last-minute appeal. They also contend it deprives them of the chance to meet with family members and make final arrangements prior to their deaths.

Government officials argue that informing death row inmates of the time of the execution other than on the morning it is carried out carries the risk of the condemned becoming psychologically unstable, committing suicide or assaulting prison staff and other inmates.

Tamai’s granddaughter lived with him until she graduated from senior high school. She surmised that he bore a heavy burden throughout life because he oversaw 46 executions during the six years he was in charge of Osaka Detention House.

She also felt that her grandfather made the recording because he wanted future generations to hear it and ponder the nature of the death penalty system.

The woman said she wanted the tape to be widely shared and approached universities and libraries about storing the recording, but she was turned down on grounds it was not a book. She ended up passing on the recording to a lawyer through an acquaintance. The lawyer in turn passed it on to colleagues handling the lawsuit for the death row inmates.