At least 2 dead as typhoon gets downgraded, now mopping up 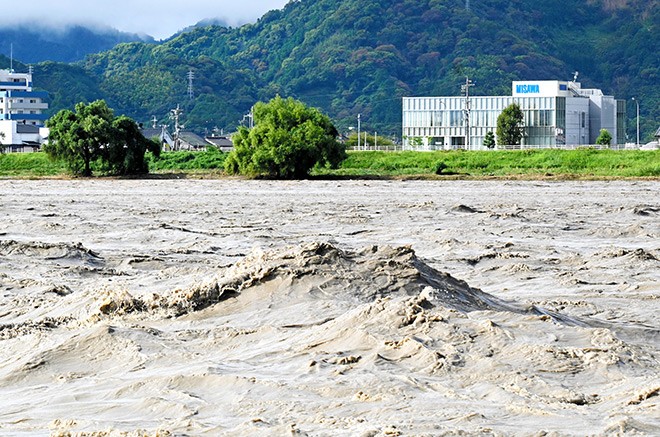 Water levels of the Abekawa river in Shizuoka Prefecture rise on the morning of Sept. 24. (Akari Uozumi)

Typhoon No. 15 weakened to an extratropical low-pressure system on Sept. 24 but not before it brought heavy rain to eastern Japan that left at least two people dead.

The Japan Meteorological Agency cautioned against landslides and flooding as heavy rain was forecast for the Kanto and Tohoku regions.

Linear rainbands led to rainfall in Shizuoka Prefecture that exceeded the average amount for all of September. Between 5 a.m. on Sept. 22 and 6 a.m. on Sept. 24, Shizuoka city recorded 419.5 millimeters of rain, while Fujieda had 410 mm and Hamamatsu had 349 mm.

The 29-year-old driver of car that overturned and ended up in a pond in Kakegawa, Shizuoka Prefecture, was confirmed dead at a local hospital. A 45-year-old city resident pulled from his home after it collapsed in a landslide was also confirmed dead.

Forty-two evacuation centers were set up in Kakegawa as an evacuation order was issued for the entire city.

Three homes in Hamamatsu were damaged due to a landslide but no residents were seriously hurt.

At least 60 homes were flooded as water levels rose in rivers, according to Shizuoka prefectural government officials. Evacuation orders were issued for about 1.08 million residents of 12 municipalities.

Power outages also hit Shizuoka Prefecture, leaving about 120,000 households without electricity. There was no indication when power would be restored since landslides and flooded roads made inspection of power lines difficult.

Operations were suspended along some sections of the line in Aichi Prefecture from the previous evening and over the entire Tokyo to Shin-Osaka section later that night. That meant some passengers spent the night in the train cars stopped at Tokyo and Nagoya stations.