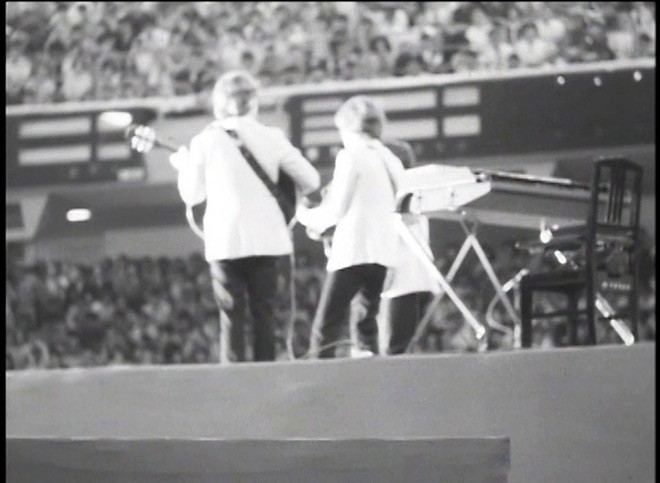 The Beatles perform during what is believed to be the group’s final concert in Japan on the evening of July 2, 1966. (Shot by the Metropolitan Police Department in Tokyo and provided by nonprofit Joho Kokai Shimin Center)

Rare censored footage of the tight security put in place by Tokyo police when the Beatles came to Japan to perform in 1966 has finally reached the public domain.

The group was in Japan from June 29 to July 3. It was their first and last tour in Japan as a band.

It shows police meetings to discuss security measures and officers at checkpoints set up around Haneda Airport in the capital for the arrival of the four-member group.

The footage also captures a vehicle displaying a banner that read “Demoralizing Beatles must be driven out” heading in the direction of the cameraman.

“The film is stunning for Beatlemania around the world,” he said. “It captures the public mood back then and is historically significant.”

The group gave five performances in all: on the evening of June 30, day and evening shows on July 1 and the same on July 2.

The footage includes the never-before-seen final performance at the Nippon Budokan hall on July 2.

Of the five performances, audiences were at their most frantic during the last show, according to Omura.

He noted that the first show was marred by problems, including Paul’s microphone, which was improperly set on the stand, allowing it to occasionally swing sideways as he sang.

“It shows members of the band waving to their fans as they also waved handkerchiefs during the final concert, giving us a peek into what it was like inside the concert venue,” he said.

The video was disclosed in response to a disclosure request made by a nonprofit group Joho Kokai Shimin Center (Civic center for information disclosure) in 2015.

A representative said the center received a DVD of the video in July. It was shown during an event in Yonago, Tottori Prefecture, on Sept. 24.

It came with the faces of people blurred, except for the Beatles. The Supreme Court ruled in 2018 that measures should be taken to protect their privacy as it was possible to identify the individuals shot in the video.

As a result, the faces of fans, police officers--even Brian Epstein, the manager who was known as a fifth Beatle--were blurred.