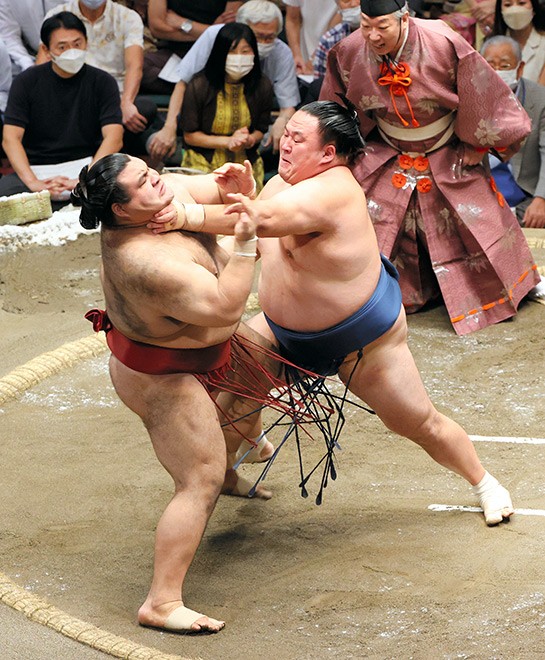 Maegashira No. 3 Tamawashi, right, forces out Takayasu, maegashira No. 4, to win his second career title on the final day of the Autumn Grand Sumo Tournament at Ryogoku Kokugikan on Sept. 25. (Naoko Kawamura)

Rank-and-file Tamawashi became the oldest wrestler to win the sumo championship in more than 60 years on Sept. 25, defeating fellow Takayasu on the final day of the tournament.

Tamawashi, who is two months shy of his 38th birthday and ranks as maegashira No. 3, finished the Autumn Grand Sumo Tournament with a 13-2 record, grabbing his second career title.

The Mongolia native won his first three years ago.

His victory made him the oldest wrestler to win the title since 1958, when the current system of holding six tournaments a year began.

Tamawashi headed into the final day of the 15-day meet at Ryogoku Kokugikan as the solo leader with Takayasu, maegashira No. 4, one win behind him.

Takayasu, 32, was pinning his hopes for his elusive first Emperor’s Cup by, first, winning his bout with Tamawashi, to tie his record with Tamawashi’s and defeating him again in a playoff.

But Takayasu, a former ozeki, was forced out by Tamawashi in an intense showdown that put his hopes of a playoff in the dirt.

“I am so happy to win the Emperor’s Cup thanks to passionate support from my fans,” Tamawashi said in an interview after the tournament, adding that they are a source of inspiration as he gets older.

He also expressed gratitude to Takayasu for the numerous times they had practice bouts together.

After arriving in Japan at the age of 18, Tamawashi made his professional debut in 2004. He is known for his powerful thrusts and shoves.

The best rank he had attained so far is sekiwake, the third highest after yokozuna and ozeki.

The sole yokozuna Terunofuji withdrew from the meet on Day 10 after logging five wins and four losses. He has been plagued by knee injuries over many years.