Japanese leader’s trip to China in ‘72 was diplomatic gamble 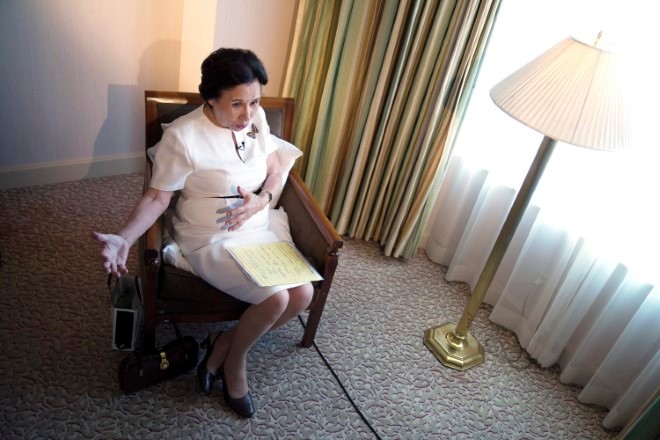 Makiko Tanaka, the daughter of former Prime Minister Kakuei Tanaka, speaks during an interview with The Associated Press on Sept. 14, 2022, in Tokyo. (AP Photo)

The Japanese leader who normalized relations with China 50 years ago feared for his life when he flew to Beijing for the high-stakes negotiations at the height of the Cold War, according to his daughter, a former Japanese foreign minister.

Kakuei Tanaka’s mission to normalize relations with China just two months after taking office was a huge gamble, his daughter, Makiko Tanaka, said in an interview with The Associated Press ahead of the 50th anniversary Thursday of the historic communique that Tanaka signed with his counterpart, Zhou Enlai.

The then-prime minister told his daughter before his departure that he would resign if his mission failed, recalled Makiko Tanaka, who served as foreign minister and in other key posts from 1993 to 2012.

Opposition was so fierce in Japan, she said, that some ruling party hawks came to their home the day before the trip to try to stop him from leaving. He told his daughter that he feared being poisoned in China, which was a largely closed country in 1972.

Earlier that same year, U.S. President Richard Nixon had made his visit to communist China that would transform China’s position in the world. His trip led to the U.S. establishing diplomatic relations with China in 1979 and the parallel severing of formal ties with Taiwan, the self-governing island that Beijing claims as its own.

Much has changed, too, in the China-Japan relationship over the past half-century. The neighbors enjoy deep business and cultural ties. Japan has given China more than $25 billion in development aid over the years, and China is Japan’s biggest trade partner.

But the underlying tension that marked Tanaka’s diplomatic foray remains.

China, a relative backwater then, is now the world’s No. 2 economy and a growing military power. Tensions surround Beijing’s rivalry with Washington and its increasingly assertive activity in the region, especially around Taiwan.

Japan considers China a security threat and is particularly worried about Chinese naval activity around Japanese-controlled islands in the East China Sea that Beijing also claims.

Top-level visits have stalled in recent years, and Japan has been steadily building its military, largely in response to China.

Current Prime Minister Fumio Kishida’s government has pledged to further reinforce military power and to nearly double its spending over the next five to 10 years.

“Japan’s alliance with the United States is a lynchpin of our diplomacy, but we should not isolate China,” Makiko Tanaka said.

She raised worries about U.S.-led groupings of like-minded democracies, including Japan, as a counter to China, and cautioned against pushing Beijing toward closer ties with Russia.

“We are just banding together and being confrontational” toward China, said Tanaka, who was foreign minister in 2001-2002 under former Prime Minister Junichiro Koizumi. She criticized U.S. House Speaker Nancy Pelosi’s visit to Taipei in August for escalating tensions.

Wang Jiaxun, president of the China Enterprises Association in Japan, which includes 150 Chinese companies, acknowledged difficulties but said the neighbors need each other as business partners.

“China and Japan have thousands of years of up-and-down relations,” said Wang, whose association sponsored a weekend Japan-China festival in Tokyo in hopes of improving rocky ties.

China has not forgotten Japan’s support after the 1972 normalization, and even though his country has become a major power, the two countries can learn from each other. China can provide a huge market for Japan and further contribute to the Japanese economy, he said.

When Tanaka, who died in 1993, made his trip, memories were fresh in Beijing of Japanese brutality during the first half of the 20th century. There was also opposition from anti-communist lawmakers in Tokyo.

Makiko Tanaka accompanied her father on many foreign trips, but he refused to take her to Beijing because of safety worries.

The main sticking points in 1972 were Japan’s apology for wartime aggression and differences over Taiwan--issues that strain relations today.

Kakuei Tanaka, however, was determined to make amends with China and change the state of the relationship with a country he saw as a growing power, his daughter said. He believed energetic diplomacy was the only way his resource-poor country could rise from the devastation of the war and survive global competition.

Makiko quoted her father as saying that “leaving the China issue dangling is not good for Japan’s future. She said her father “was ready to lower his head and apologize to China (over Japan’s wartime atrocities) to create a win-win relationship for Japan’s major benefit.”

Contrary to his worries, Tanaka was treated in China with extreme hospitality.

His biggest relief centered on Zhou’s pledge to waive China’s right to seek war compensation, which he said saved Japan from going bankrupt. Makiko Tanaka says the waiver was in exchange for Japan’s pledge to sever formal ties with Taiwan.

The East China Sea islands dispute was not part of the 1972 communique. Kakuei Tanaka raised the issue but Zhou said he did not want to discuss it, according to diplomatic records released by the Japanese Foreign Ministry.

In response to Chinese concerns, the Japanese side strengthened an apology over Japan’s wartime aggression in the communique.

Makiko Tanaka said an improvement in the current political relationship between Beijing and Tokyo is hopeless, but she is pushing for deeper ties in the private sector. She has been invited to speak at Qinghua University in Beijing, and she is planning to invite a Chinese delegation to visit her father’s tomb in his hometown of Niigata later this year.

“If business, scientists and cultural exchanges were prompted more, there would be a sense of closeness” between the countries, Tanaka said. “Diplomacy is about people, and whether you can develop personal relations and talk when needed, but politicians who can do this are rare.”