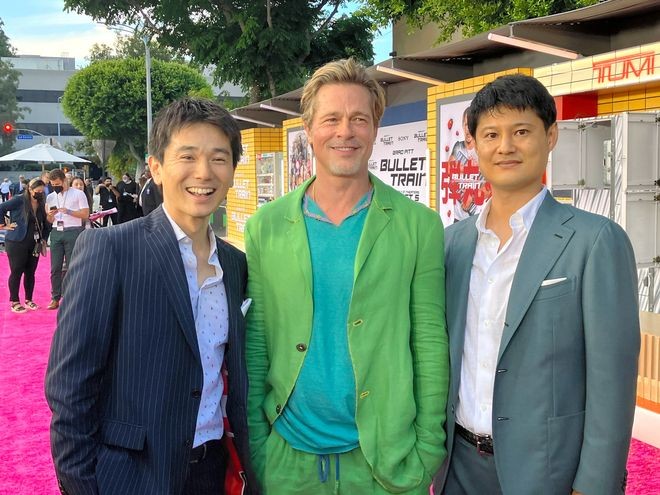 Frustration over the West’s apparent indifference to Japanese novels led to the making of “Bullet Train,” the Hollywood action-thriller starring Brad Pitt.

The movie is an adaptation of Kotaro Isaka’s novel “Maria Beetle.” Isaka is one of Japan’s most popular crime authors, but he is relatively unknown in the Western world.

Two literary agents, Ryosuke Saegusa, 44, and Yuma Terada, 40, were annoyed that Japanese novelists like Isaka have remained in obscurity among Western readers.

So the two went overseas to promote Japanese authors. Through this effort, they eventually entered the Hollywood film industry.

When Terada was working in the financial industry, Saegusa worked with Isaka as an editor of literary magazines at publisher Kodansha Ltd.

Saegusa said one reason Japanese novels are not widely read outside the country is that Japanese authors, unlike overseas novelists, do not have agents handling their publishing rights. Instead, publishers represent them for each work.

Saegusa and Terada set up a literary agency before founding a company in 2017 to handle foreign copyrights for writers.

Isaka’s novels have been translated in China and South Korea, but his works had rarely been seen in the United States and Europe.

The pair tried to market his books to publishers in New York and London, but it was difficult even to have them read.

They came up with the idea for a film adaptation, believing that Hollywood would understand how interesting Isaka’s works are.

The two decided to promote “Maria Beetle” because they thought its plot--assassins fighting over a briefcase aboard a Shinkansen bullet train--would be cinematically fun.

They had turned down a film adaptation project in Japan, but Isaka encouraged them by saying he was willing to see his work made into a Hollywood movie.

An acquaintance of the pair who works at a U.S. film company agreed to present the project at an in-house meeting.

However, Saegusa and Terada were told several months later that the project failed to get the green light.

To learn from the failure, they asked the acquaintance to show the documents used at the meeting. They were shocked to see how boring the project appeared.

Saegusa and Terada were so unhappy that they decided to take matters into their own hands.

The original novel was an ensemble story.

To turn it into a two-hour movie, they had to provide a clear protagonist. They also needed to reconstruct the narrative to tell the story of each character in an interrelated manner.

They asked a translator to work on an English version of the novel that was good enough for publishing.

The translated work was included in a promotional package along with the project proposal.

After visiting film companies in the United States to build personal connections in the industry, the two were finally given about 15 minutes to pitch their project.

“They didn’t know who Isaka was, so we explained in a simple manner why it would be fun to see a two-hour film based on this book," Terada said.

The pair took a step-by-step approach.

They initially introduced the concept of the project, the characters and the main plot in one piece of paper.

When the producers showed an interest, the pair provided 10 pieces of paper containing more information.

And when the producers became more interested, the two gave them an English version of the novel.

Saegusa and Terada also emphasized that Isaka is popular in the huge Chinese market.

The pair felt confident with their efforts.

They received an offer from three companies, and signed a contract with Sony Pictures Entertainment Inc.

Everything has gone smoothly since then, with David Leitch attached as director and Pitt as the protagonist.

Saegusa and Terada were executive producers of “Bullet Train.”

“In hindsight, doing everything by ourselves worked well because it would normally take a screenwriter, an editor and many others to work together,” Saegusa said.

The two also provided ideas for the film adaptation from the early stages, including the screenplay.

At the same time, their marketing efforts for “Maria Beetle” proved successful. It was published in Britain under the title, “Bullet Train.”

The novel was shortlisted for the U.K. Crime Writers’ Association’s award, Dagger for Crime Fiction in Translation, in May.

“(Japanese) novels will remain unnoticed unless action is taken,” Terada said. “Hollywood is looking for anything interesting. I think there is demand, so we will promote (Japanese novels) instead of just waiting for a chance to come along,” Terada said.

Saegusa added, “Japanese manga and anime titles are well known, but we have interesting novels in Japan, and their potential will expand when it becomes widely known that they can be made into movies.”

They said they are currently working on several projects.