For many, it was business as usual in Tokyo on Abe’s funeral day 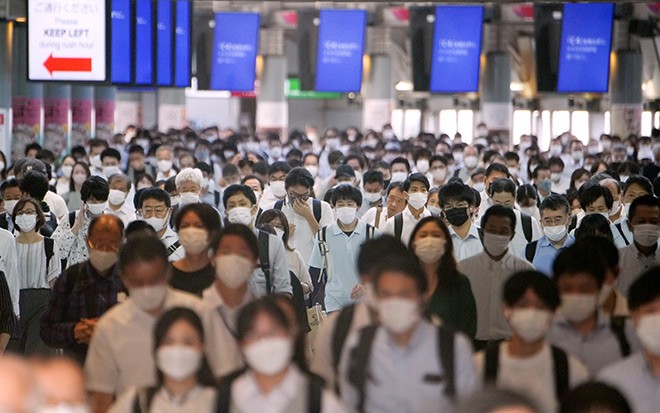 Commuters at JR Shinagawa Station in Tokyo on the morning of Sept. 27 (Kazushige Kobayashi)

A woman from Kyoto who was visiting a friend in Tokyo on Sept. 27 had feared the capital would be chaotic because of the state funeral for former Prime Minister Shinzo Abe.

“Before I came here, I anticipated a tense atmosphere in Tokyo, but it turned out not to be the case,” the 55-year-old homemaker said.

The state funeral, held in Tokyo’s Chiyoda Ward, was only the second such event for a former prime minister in postwar Japan. But for the most part, it was business as usual in the greater Tokyo area.

A 55-year-old company employee was one of tens of thousands of commuters who flooded Tokyo’s JR Shinagawa Station in the early morning.

He said that Sept. 27 was just like a regular work day.

But he said he would watch TV coverage of the state funeral even though he was opposed to holding the event.

“I am curious to see what it was like since it has been in the news so much,” he said.

The woman from Kyoto who had taken a night bus to Tokyo also said she was against the state funeral.

She cited Abe’s possible involvement or influence in a flurry of favoritism scandals involving the Moritomo Gakuen school operator and the Kake Educational Institution.

“I still harbor many doubts about his role,” she said. “A state funeral was not necessary for a person whose name has not been cleared.”

At the Hachiko statue, a popular meeting spot outside JR Shibuya Station in Tokyo, a third-year high school student said Abe, who was Japan’s leader for more than eight years, deserves a state funeral.

“Abe is the first prime minister to come to my mind,” the 17-year-old said before he headed to school. “We should send him over by giving him a state funeral.”

He said he will watch TV news about the funeral after he gets home.

“I want to say farewell with a sense of gratitude,” the student said.

In Osaka’s Sumiyoshi Ward, company employee Mari Matsuoka said she had informed a business partner in Tokyo that deliveries of parcels would be delayed due to the heavy security in the capital for the funeral.

But she said on Sept. 27 that the funeral’s impact on her company’s operations was minimal.

Matsuoka, 47, said she was concerned that Abe’s funeral would further split the public, in contrast to Queen Elizabeth II’s state funeral, which appeared to bring Britons together in mourning.

“I am sorry about the way Abe had to die,” she said. “But Prime Minister Fumio Kishida’s decision to hold a state funeral for Abe only deepened divisions in the Japanese population.”

She said she hoped the funeral would conclude without any trouble because many foreign dignitaries have come to Japan to attend the ceremony.

Increasingly under fire for going ahead with the fully tax-funded state funeral for a politician who split the public, the central government avoided issuing a Cabinet agreement asking local authorities and the general public to express their condolences.

That decision was in sharp contrast with instructions for previous funerals for former prime ministers.

For example, after former Prime Minister Yasuhiro Nakasone died in 2020, local governments were asked to express their condolences during the funeral hosted by the Cabinet and the ruling Liberal Democratic Party.

The Yamaguchi prefectural government planned to fly the national and prefectural flags at half-staff on Sept. 27. Abe represented a constituency in the prefecture.

But it could not do so in the morning because of the continuing rain. Prefectural officials hoisted the flags in the afternoon after the rain let up.

“Abe went out of his way to help our prefecture,” said a 50-year-old woman working for the prefectural government. “I see no problem with flying the flags at half-staff.”

But the Okinawa prefectural government opted out of flying half-mast flags the same day.

“I cannot take interest in the state funeral because no clear explanations were given on why it has to be held,” a 50-year-old prefectural employee said.