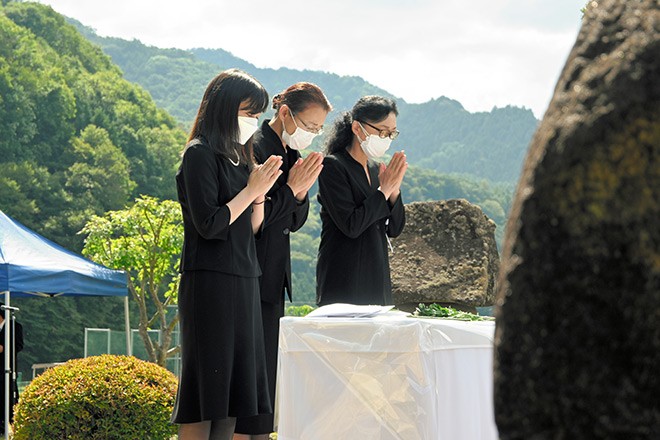 OTAKI, Nagano Prefecture--Bereaved families of dozens of hikers who died or went missing in the nation’s worst volcanic eruption disaster in the postwar era gathered here to remember the victims on Sept. 27, the eighth anniversary of the tragedy.

About 50 relatives also prayed for the discovery of those who have yet to be found during this year’s memorial service.

The families observed a minute of silent prayer for the victims at 11:52 a.m., the exact time when the 3,067-meter volcano straddling the borders of Nagano and Gifu prefectures erupted.

One of the attendees was Keiko Yokota, 69, who came from Okayama Prefecture in western Japan. She lost her husband, Kazumasa, 61, in the eruption.

It was her first time to show up for the service in seven years, following the first in 2015. She decided to attend this year as her husband’s hat was discovered in a search by a group of bereaved families around the mountaintop on Sept. 21.

“I felt like it was his message for me to come to the service once in a while,” she said. “I apologized to him for having missed the past events.”

Parts of the volcano’s crater remain off-limits even today. Kiso town in Nagano Prefecture, one of the four municipalities at the foot of the mountain, has set up emergency shelters near the mountaintop as part of its efforts to prepare for a future disaster.

(This story was written by Okuto Ko and Takunori Yasuda.)

Relatives of victims of the eruption of Mount Ontake offer prayers for their loved ones during a memorial service in Otaki, Nagano Prefecture, on Sept. 27. (Okuto Ko)

Nagano Governor Shuichi Abe pays tribute to victims of the eruption of Mount Ontake in 2014 that left 63 people dead or missing during a memorial service in Otaki, Nagano Prefecture, on Sept. 27. (Pool)