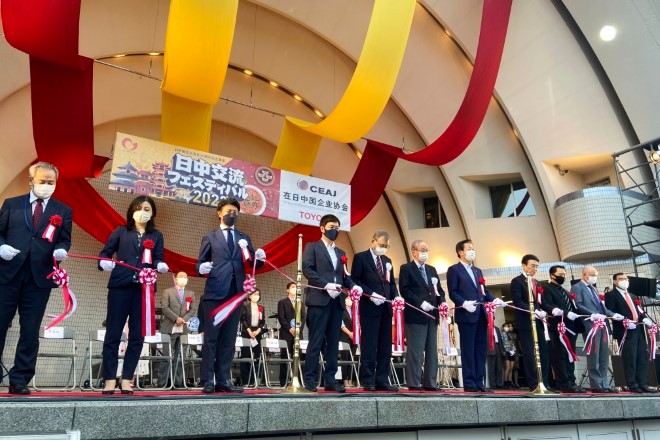 Organizers and guests participate in a ribbon-cutting ceremony during the annual Japan-China Exchange Festival at Tokyo’s Yoyogi Park in Tokyo on Sept. 24, 2022, marking the opening of the two-day friendship event and also marking the 50th anniversary of the Sept. 29, 1972, normalization of the ties between the two countries. (AP Photo)

Friend or foe? Or both? On the streets of Tokyo and Beijing, the ties between Japan and China remain complicated and often contradictory, 50 years after the two Asian countries normalized relations as part of the process that brought Communist China into the international fold.

Chinese official media and textbooks memorialize the victims of Japan’s brutal invasion during World War II, even as young urbanites slurp “ramen” soup noodles in a two-story restaurant row made to look like Tokyo’s narrow alleyways.

In the real Tokyo, Japanese flocked to a festival last weekend to try Chinese dumplings, even as they worried about the growing military prowess of their much larger neighbor and its designs on the self-governing island of Taiwan--which happens to be a former Japanese colony.

“Politics is politics, it has nothing to do with the exchanges between us people,” said Zheng Bin, baking a Chinese leek pie at the festival in Yoyogi Park. He has spent half his life in Japan, coming as a student 30 years ago, and now runs six Chinese restaurants in the Tokyo area.

Politics influences people, though, and critical views are on the rise as the two countries mark the 50th anniversary on Thursday of the agreement to establish diplomatic relations, which followed U.S. President Richard Nixon’s groundbreaking visit to China earlier in 1972.

A survey last year by Japanese think tank Genron NPO found that 90 percent of Japanese had a negative image of China, and 66 percent of Chinese felt the same way toward Japan, up from 53 percent the previous year.

“It’s normal that there are problems at the 50th anniversary,” said Li Tingjiang, the director of a Japanese studies center at Tsinghua University in Beijing. He cited geopolitics and the social and economic differences between the two countries. “But we shouldn’t deny the longstanding positive impact from mutual understanding and cultural exchange over the past 50 years.”

Japanese college student Momoe Unoue went to the Tokyo festival to scout out the food--she wants to sell Chinese dumplings and buns at an upcoming event with exchange students from China.

Until a high school trip to China, her view of the country was based solely on textbooks and TV news--and it wasn’t a positive one. Once there, she was struck by the eagerness of her Chinese counterparts to communicate, prompting her to major in Asian studies.

“I would have thought of China as a scary nation if television news were my only source of information about it,” she said.

The Japan-China Exchange Festival returned last weekend after a two-year hiatus because of the COVID-19 pandemic. Organizers hope it will help restart cultural exchange despite tense political ties as Japan is pulled into a growing rivalry between the U.S. and China.

Festival adviser Yasuo Fukuda, a former prime minister who is an active proponent of better ties with China, said the pandemic has reduced communication between the two nations.

“Lack of dialogue increases risks of misunderstanding … and things that do not happen under normal circumstances could happen,” he said in an interview with the AP.

“I hope this festival provides an opportunity for you to think of that day 50 years ago and find our path for the future,” he said in remarks at the opening of the two-day event.

Festival goer Masaki Makita, who studied and worked in Shanghai for nearly a decade, has issues with China’s policy toward Taiwan and its crackdown on dissent in Hong Kong. He feels media coverage has affected people’s views in both countries, probably more so because of the isolation from the pandemic.

“I think news about China that we see in the Japanese media could be somewhat biased, while I don’t think China is right either,” he said. “But I have many Chinese friends, and it has nothing to do with politics.”

A fatty, garlicky smell greets visitors to Yume Wo Katare restaurant in the Chinese capital. And come they do, lining up at times for the 90 or so bowls of Jiro-style ramen served daily at the shop in the Japanese restaurant row.

Owner Shi Xin, who has lived in Japan, expressed a sense of achievement at bringing back the hearty soup with its thick noodles and winning over fans among both Chinese and Japanese living in Beijing.

“Although it’s nothing huge, through small things like food, I hope to promote friendship between China and Japan and contribute to cultural exchange,” he said ahead of the dinnertime rush at his 6-year-old restaurant.

Beijing residents expressed a friendliness toward Japan and a fondness for Japanese culture, though some added that the wartime past could not be forgotten, particularly in the runup to China’s National Day on Saturday.

“If it’s a period like National Day, I think there are expectations that our generation and the younger generations can still remember the history of fighting against Japanese aggression,” said 35-year-old Su Mengtong, who was waiting for friends getting COVID-19 tests at a booth near the Museum of the War of Chinese People’s Resistance Against Japanese Aggression.

“After all, the invasion is a big trauma for our country,” he said.

Recent decades have brought Japanese food and pop culture, including movies, TV shows and “manga” comics, said Li, who is currently a visiting scholar in Tokyo.

Ramen, a Japanese export now popular in many countries, actually has Chinese roots, dating from the 19th century when noodle soup was brought to Japan, according to the Shin-Yokohama Ramen Museum in Japan.

But Japan’s soft power is not immune from its wartime history. Chinese police detained a woman posing for photos in a kimono at a Japanese-style commercial area in the city of Suzhou in August, shortly before the anniversary of Japan’s surrender at the end of World War II.

The incident sparked a heated discussion online, with some saying that a love for Japanese culture doesn’t make a person unpatriotic, and others accusing the woman of hurting the feelings of the Chinese people close to a wartime anniversary.

Social media has been the main platform for discontent about Japan. Tens of thousands of people left unfavorable comments about former Japanese leader Shinzo Abe after his assassination in July, because of his association with nationalists who deny or minimize the atrocities committed by Japan’s military in China.

Liu Wei, who is in his 50s, said China needs to stand firm on territorial issues--Japan and China have competing claims to islands in the East China Sea--but more generally favors looking forward rather than back.

“That time has already passed,” said Liu, who was taking a walk near the war museum. “If you keep holding onto it, it doesn’t generate too much positive impact on the future.”