VOX POPULI: The war drags on as Putin pushes his people ‘into the river’ 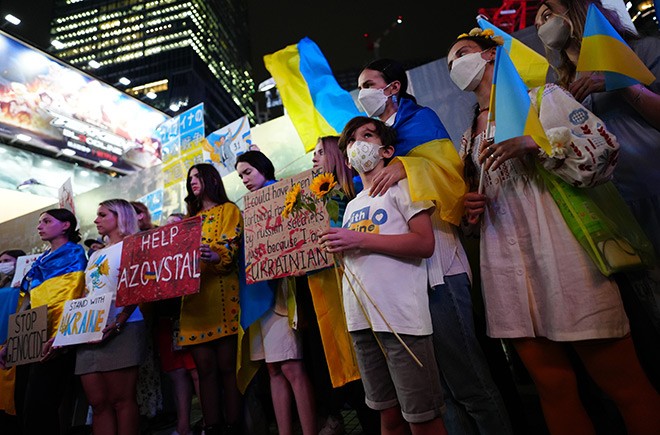 About 100 protesters stage a rally in front of Tokyo’s Shibuya Station on Aug. 24 to mark the six-month anniversary since Russia launched its invasion of Ukraine. (Asahi Shimbun file photo)

Being exposed daily to news of the Russian invasion of Ukraine, I have lately begun to sing antiwar songs to myself.

“Waist Deep in the Big Muddy,” a Vietnam War-era song by U.S. folk singer and social activist Pete Seeger (1919-2014), is about a platoon fording a river.

When the river turns out to be dangerously deeper than expected--waist-deep--the sergeant asks the captain if the troops should turn back, saying, “Sir, with all this equipment, no man will be able to swim.”

But the captain insists on pushing on, until, “We were neck deep in the Big Muddy,” the song goes.

To my mind, the captain is none other than Russian President Vladimir Putin.

He may have started the war in Ukraine believing it should be as effortless as fording a shallow river.

But the war continues to drag on, and Russian citizens now realize they could be called up for active service on any day. They have started forming long lines at the border to flee their country.

Why aren’t they protesting at home? In response, Russian journalist Ilia Krasilshchik wrote in an opinion piece in the New York Times, “Well, many are.” He explained that many people actually stood up but were arrested.

“This is bravery beyond the imagining of those who have never experienced life in a dictatorship.”

It is a society where no one is allowed to voice their opposition to war.

In Russia as well as in Ukraine, the war is tearing close friends apart.

“The Cruel War,” an iconic 1962 antiwar song by Peter, Paul and Mary, expresses the grief of a young woman whose lover, Johnny, has been called up for service.

Being a love song, its appeal is all the more powerful.

One abhors war as a human being, family or lover. When will a truce be called?