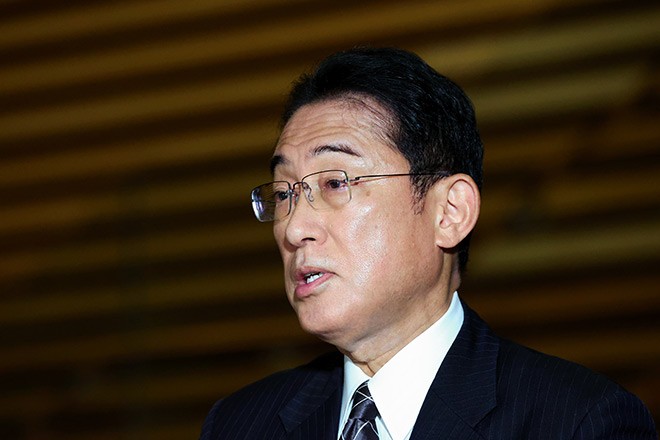 Prime Minister Fumio Kishida speaks with reporters on Sept. 29 about a new economic package to be compiled in October. (Koichi Ueda)

A measure to reduce expected higher electricity bills in the coming months will be a main pillar of a comprehensive economic package to be compiled next month.

Prime Minister Fumio Kishida instructed his ministers to come up with a proposal for the package at a Cabinet meeting on Sept. 30.

“By seamlessly responding to the changing economic situation, including surging consumer prices, we will move forward with our ‘new capitalism,’” Kishida said at the Cabinet meeting.

He has pushed for coming up with a new capitalism system since becoming prime minister about a year ago, but so far, there has been little in the way of specific measures to define what that constitutes.

Electricity rates have gone up by between 20 and 30 percent over the past year, with further increases expected due to Russia's invasion of Ukraine.

Kishida told reporters on Sept. 29 that electricity bills could rise a further 20 to 30 percent next spring.

The comprehensive economic package is intended to deal with such changes. Kishida will outline what he has in mind during his first policy speech on Oct. 3 once the extraordinary Diet session convenes.

Specific measures, including one for electricity bills, are expected to be included in the supplementary budget proposal to be submitted to the session.

One measure also expected to be included in the package will be designed to help increase foreign tourist consumption as entry restrictions will be relaxed from Oct. 11.

With the current weak yen, the government is seeking to increase foreign tourist consumption to beyond the 5 trillion yen ($34.6 billion) it annually spent before the novel coronavirus pandemic.

Other measures to be included call for reviewing the current seniority-based pay scale at many companies, as well as providing support to retrain workers so they can find new jobs in the digital sector.

The measure to soften the spike in electricity bills is intended to provide financial support to a wider range of households.

The Kishida administration in September approved cash handouts of 50,000 yen per household, but those will only go to households with low incomes that do not pay residential taxes.

The electricity measure will come at a great cost, however. About 14 trillion yen is annually spent on electricity, and if the government seeks to restrain higher costs by 10 percent, that will mean coming up with 1.4 trillion yen.

The already woeful government fiscal situation could worsen further if the measure has to be implemented for a while.

Kishida also told reporters on Sept. 29 that he would ask a wide range of experts to present their views about the recent state funeral for former Prime Minister Shinzo Abe.

Kishida wants to begin evaluating whether the scale and amount of money spent on the state funeral was appropriate.

(Masatoshi Toda contributed to this article.)