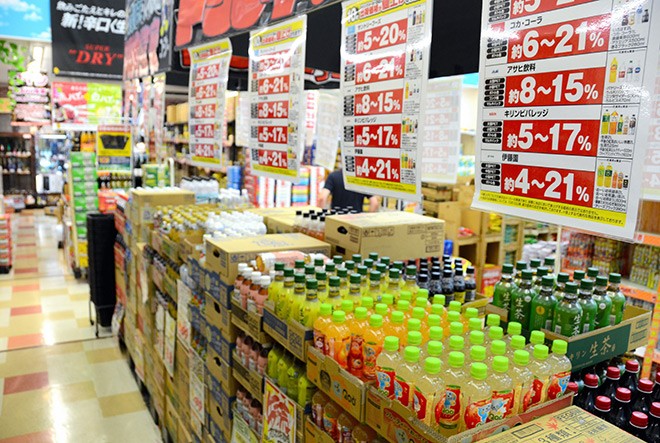 Consumers were seen lugging cases and cases of beer from stores in last-minute purchases before the price of suds increases starting on Oct. 1.

Beer is one of about 6,500 food products that will cost more in October, according to a survey by research company Teikoku Databank Ltd.

On the afternoon of Sept. 26, staff at Mega Don Quijote Omori Sanno, a large discount store in Tokyo’s Ota Ward, were busy dealing with a flow of shoppers looking for 24-can cases of beer.

A woman in her 60s who lives in the neighborhood said she had refrained from buying beer in bulk.

“I always buy a six pack of canned beer,” she said.

But with the price hike coming, she changed her shopping habits and placed a 24-can case of Kirin Ichiban Shibori into her shopping cart.

“Other items are getting more expensive, too, so I guess I can’t complain about the beer price also going up,” she muttered.

Prices of food products, ranging from snacks to sushi, have been rising this year. And now, beer has been caught up in the inflationary trend.

The price hikes for canned beer will be the first in 14 years for the major beer companies of Asahi Breweries Ltd., Kirin Holdings Co., Suntory Holdings Ltd. and Sapporo Breweries Ltd.

Storefront prices of beer and beer-related beverages are expected to increase by about 4 to 13 percent.

The Don Quijote store in Tokyo started getting ready in the second half of August. Staff put up posters in the liquor section announcing the price hike and encouraged shoppers to fully stock up before October.

But some customers filled their carts with five cases, or 120 beer cans.

“More and more people are bulk buying,” said a worker in the liquor section. “Those who usually buy one or two boxes are now going for four or five boxes at one time. I even saw one hoarding 20 cases.”

Asahi and Kirin have increased production of their most popular brands of canned beer by 20 to 30 percent year on year.

Suntory said it expects its shipping volume of Premium Malt’s for September to increase by about 20 percent because of last-minute buying.

But the breweries are concerned that demand will plummet from October when consumers become even more budget-minded.

“We expect the drop in retail sales in October to offset the surge from the last-minute demand in September,” said a representative of a major beer company.

“It’s not only beer but everything else is getting expensive,” the representative said. “If more people cut down on their spending, it will be difficult for us to project how far demand for beer will fall.”

According to the Teikoku Databank survey, the continuing increase in costs for raw materials and fuel, along with the weakening yen, will further hit consumers’ budgets for everyday items, especially food products.

Companies have announced price increases for 20,056 food items by the end of this year, including a record-high 6,532 products, or 30 percent of the total, starting in October.

The number of items for October is 2.6 times larger than the figure in August.

The products that will become more expensive in October include soft drinks, mayonnaise, processed meat products and pre-packaged curry.

Higher prices are also expected for dining out, taking out non-life insurance policies and receiving electricity.

(This article was compiled from reports by Yuji Yamashita, Hiroki Hashimoto and Hayato Murai.)