Japan to pay up to $320 million for U.S. company’s chip production 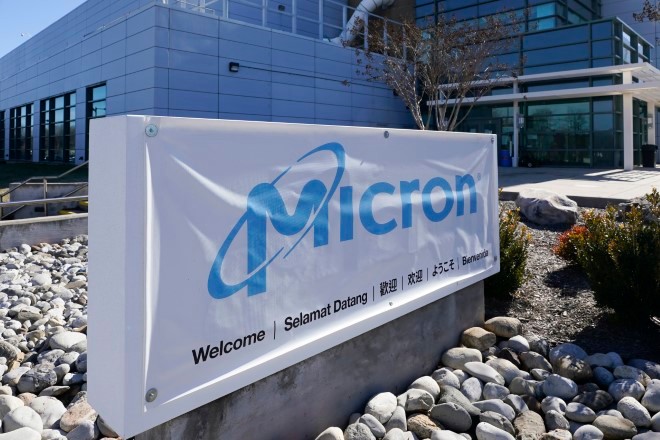 A sign marks the entrance of the Micron Technology automotive chip manufacturing plant on Feb. 11, 2022, in Manassas, Va. Japan is providing a major U.S. chipmaker a subsidy of up to 46.6 billion yen ($322 million) to support its plan to produce advanced memory chips at a Hiroshima factory, the Japanese trade minister said Friday, Sept. 30, 2022. (AP Photo)

Japan is providing a major U.S. chipmaker a subsidy of up to 46.6 billion yen ($322 million) to support its plan to produce advanced memory chips at a Hiroshima factory, the Japanese trade minister said Friday.

The announcement to subsidize Micron Technology comes on the heels of U.S. Vice President Kamala Harris’ visit in Japan as the two countries step up cooperation on expanding manufacturing and supply chains for critical materials.

“I hope the deal will contribute to further expansion of cooperation between Japan and the United States in the area of semiconductors,” Japan’s Economy and Trade Minister Yasutoshi Nishimura said.

He said the government approved the deal Friday under a law related to economic security.

During her trip to Asia this week, Harris met with Japanese officials and semiconductor company executives to seek greater cooperation in strengthening semiconductor development and production amid China’s growing influence.

Micron was among the companies that participated in the meeting with Harris, along with Tokyo Electron, Nikon, Hitachi High-Tech Group, Fujitsu Ltd.

The United States is working to solidify its technology cooperation with Japan, South Korea and Taiwan, while trying to increase its domestic semiconductor manufacturing, amid China’s own investment in computer chips.

Nishimura has stressed the U.S.-Japan alliance on semiconductors, as well as energy and other areas.

Japan was once a world leader in computer chip manufacturing, but its status has eroded over the last two decades, and the country is increasingly worried about falling behind.

Japan has set up its own fund to support semiconductor production. Out of $4.3 billion, $3.3 billion is being provided in subsidies for a new factory in Japan’s southern prefecture of Kumamoto.