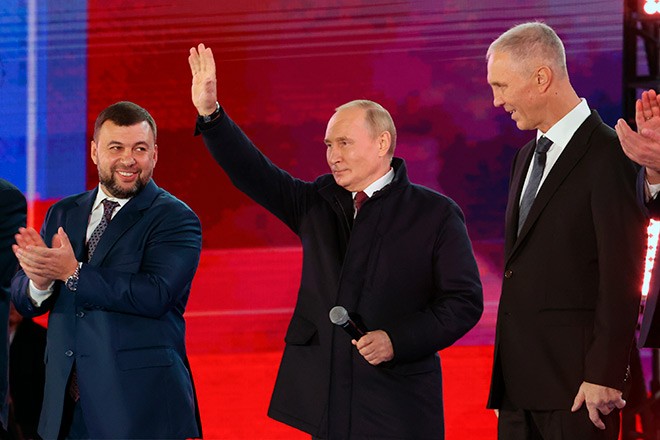 Russia has forcefully wrestled territories from a neighboring country and justified the move by fabricating public consent.

This goes far beyond a farce and qualifies as an outrageous act of destroying the international order.

Russian President Vladimir Putin unilaterally declared on Sept. 30 that four regions in eastern and southern Ukraine will become part of Russia. The Russian military has been seeking to expand its control over the four regions.

Putin cited the outcomes of sham referendums staged by Russia in the partially occupied regions, which Moscow claims endorsed the move with 87 to 99 percent of the votes supporting the annexation.

In his speech at a ceremony to annex the four Ukrainian regions, Putin said the choice of the people in these regions “has been made.” He justified the action even by invoking the principle of “self-determination” upheld by the U.N. Charter.

How could the referendum results be claimed to reflect the will of the people when the votes were held in areas where many of the locals fled to escape the war while the remaining residents feared persecution?

There have been reports from these areas describing how local collaborators and armed soldiers went door to door to collect votes. All this “flouts the purposes and principles of the United Nations,” as U.N. Secretary-General António Guterres said.

Annexing the four regions even contradicts Moscow’s initial, groundless claim that it was invading Ukraine to protect pro-Russian residents in two eastern regions from “genocide.”

In his speech at the ceremony, which was filled with jingoistic rhetoric, Putin accused the United States and other Western countries of forcefully imposing their own values on Russia to weaken it. Putin must realize that his words will come back to haunt him. He is destroying Ukraine, killing its citizens and trying to turn it into a vassal state.

While stressing the “greatness” of Russia, he has taken all kinds of actions that are seriously damaging Russia’s international reputation and pushing its neighbors into the arms of the West. Putin has only himself to blame for putting an indelible historical stigma on his own country.

Behind Putin’s reckless and aggressive behavior are his weakness and anxiety.

Putin has been put on the defensive as his military campaign in Ukraine has suffered a series of serious setbacks, including devastating routs in eastern parts of the country.

The Russian leader’s move to annex the territories is aimed at making the United States and Europe hesitate to provide military support to Ukraine by declaring the regions part of Russia and threatening to use nuclear arms if these areas come under attack.

If he is trying to stir up patriotism at home with the playbook he used in annexing Crimea eight years ago, Putin has clearly miscalculated.

His decision on a “partial mobilization” of reservists to solve the significant troop shortage and shore up his faltering war against Ukraine has created great confusion and anxiety among Russians. And it has caused his approval ratings to tank for the first time since the start of the invasion.

This blasphemy against international norms, if allowed to go unpunished, could bring the world back to the time when the law of the jungle ruled. Despite this terrifying possibility, the U.N. Security Council convened in response to Putin’s declaration of the annexation of the Ukrainian regions, but failed to adopt a resolution condemning Moscow.

While Russia was widely expected to veto the resolution, it was distressing to see China and India abstain from the vote. The integrity of sovereignty and territory is a vital principle with realistic implications for these two countries as well.

Japan and all other nations committed to protecting the rules-based international order should unite with their full strength to stop Putin’s appalling attack on the basic values that underpin that system.