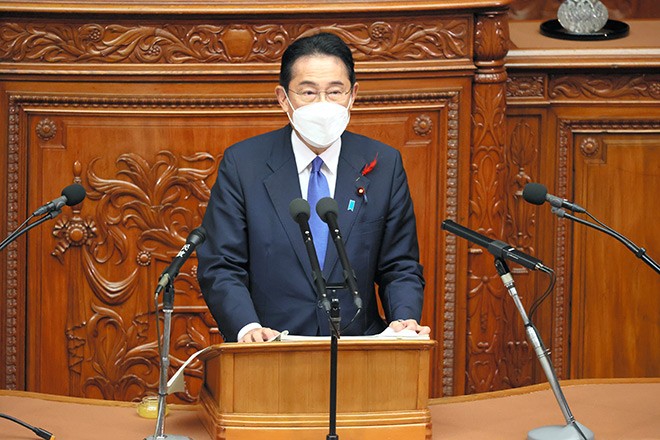 Prime Minister Fumio Kishida delivers a policy speech at the plenary session of the Lower House on Oct. 3 when the extraordinary Diet session convened. (Tsubasa Setoguchi)

Prime Minister Fumio Kishida is vowing to turn the page on the Unification Church scandal rocking national politics and focus on reviving the beleaguered economy, in part by making the most of the weak yen.

Kishida made the comments in a speech outlining his policy agenda at the opening of an extraordinary Diet session on Oct. 3, just a day shy of his one-year anniversary of becoming prime minister.

“I will face the voices of the people about the relationship with the Unification Church, perform my duty with clear explanations and go forward with various measures to restore trust,” Kishida said.

Opposition parties are expected to spend much of the session, likely to last until Dec. 10, demanding an investigation into ties between politicians and the Unification Church, now formally called the Family Federation for World Peace and Unification.

They also are expected to shine a spotlight on the decision-making process behind the controversial state funeral for slain former Prime Minister Shinzo Abe.

But Kishida hopes to put those issues to bed and focus on shoring up the battered economy.

“Reviving the Japanese economy is the top-priority task,” Kishida said in his speech.

His government is working to draft an economic stimulus package by the end of October and submit its second supplemental-spending bill.

Kishida said the government “will take unprecedented and drastic measures to directly ease household burdens and business burdens because of the increase in electrical utility rates.”

Kishida also said he wants the country to take advantage of the weak yen by bringing in more tourists and reviving tourism industry businesses. The government will allow visitors to enter the country without a visa starting Oct. 11.

He said the government’s goal is to have foreign visitors spend 5 trillion yen ($34.5 billion) in the country per year.

The prime minister said there is a need for structural pay hikes to help society deal with inflation, but that the public and private sectors must work together to achieve pay raises that match the increases in prices pinching consumers.

He said the government will provide 1 trillion yen over five years for skills training so workers can get jobs in growth industries.

The government also plans to draft labor market-reform guidelines by the end of June 2023 to facilitate labor mobility, which will include a review of the current seniority system that is expected to change so that wages are tied to job positions.

Kishida said the government will focus on four areas regarding investment and reforms to spur growth, including its “green transformation” plan and its work to increase public and private investment.

But Kishida said the stable supply of energy is a prerequisite for the green transformation. He said the government will address that issue through nuclear power by restarting about a dozen nuclear power reactors, along with other endeavors.

Kishida said that with the national security environment worsening, “strengthening (Japan’s) deterrence capacity and coping ability is a top-priority mission.”

He said the government will discuss defense capacity and costs, along with ways to secure funding to fundamentally strengthen it over five years through next year’s budget.

He said the government will not exclude any options, including counterstrike capabilities, and will discuss the matter in a realistic and timely manner.

Kishida also briefly touched on the state funeral for Abe, which has generated hot-button political questions about its legal basis, costs and whether it forced Japanese society into a period of mourning over the nation's former leader. However, Kishida avoided addressing any specific issues.

“I have taken various opinions from people seriously and will apply them in the future,” he said.