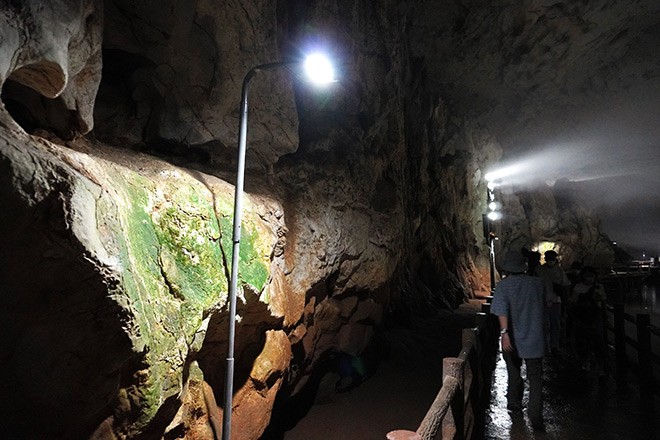 An area illuminated by a foot lamp is covered with green algae in the Akiyoshido limestone cave in Mine, Yamaguchi Prefecture. Photo taken Sept. 15 (Hiroyuki Takei)

Experts are exploring ways to inhibit the proliferation of green algae induced by LED wavelengths.

One of the highlights of Akiyoshido is Kogane Bashira (golden pillar), a 15-meter-tall structure formed over millennia by deposits of lime contained in groundwater dripping from the ceiling and running down the walls.

But parts of the limestone pillar have taken on a greenish hue, prompting visitors to wonder whether it still deserves its moniker.

“If things get worse, it will adversely affect Akiyoshido’s value as a special natural monument designated by the central government,” said Takashi Murakami, 45, an expert at the who works at the Mine city board of education’s cultural property protection.

Akiyoshido extends a total of 11 kilometers, of which a roughly 1-km section is open to the public as a sightseeing course. The route is lit by LEDs at 200 or so spots.

The artificial light has allowed photosynthetic green algae and bacteria to run rampant.

Spots that turned green near the lights are not hard to miss.

Akiyoshido opened for sightseeing purposes in the early 1900s.

Electric lights installed at 40 spots in the cave in 1925 led to unwanted plant growth, experts said.

In 1960, the number of lights was increased to 143, which caused an overgrowth of moss and fern.

Steps taken to prevent the infestation included dimmer settings for the lights and flushing the flowerless plants with water. But no drastic solution was found.

LEDs were introduced with high hopes.

It was believed that LEDs, unlike incandescent, mercury and fluorescent lamps, would hardly increase temperatures in surrounding areas and that photosynthesis would be suppressed.

An added bonus would be greatly reduced costs to illuminate the cave system.

The whitish light of LED contains a spectrum of colors. Algae that prefer bluish and orangish hues began to proliferate and replaced mosses and ferns.

“Even if the lighting is changed, it only leads to an increase in vegetation of other plants that can adapt to a new environment,” Murakami said. “It is impossible to solve the problem with one solution, so all we can do is try all possible measures.”

An expert panel commissioned by the city’s board of education has conducted a survey to study the overall cave environment, including algae growth induced by lighting, since fiscal 2019.

Based on recommendations compiled in March, officials will explore ways to restore the cave environment to its original state as much as possible from this autumn.

Specifically, they will experiment with steps to reduce the brightness of lights, change the lighting direction, use sensors to shorten light exposure time and remove algae with a sodium hypochlorite solution.

Full consideration will be given to preserving the integrity of the stalactites, the groundwater system and creatures living in the cave.

After assessing whether the measures prove effective, officials will compile guidelines at the end of fiscal 2023.

“This problem has remained unaddressed because only stopgap measures were taken,” said Kazuhisa Yoshimura, professor emeritus at Kyushu University specializing in geochemistry who serves as head of the expert panel.

“It may take a while, but we intend to analyze changes before and after (the introduction of LEDs) in a scientific manner to figure out countermeasures that are appropriate for the characteristics of Akiyoshido.”